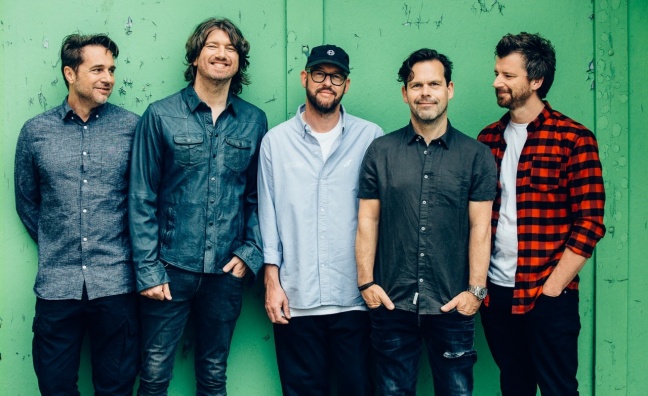 Embrace frontman Danny McNamara has told Music Week of his pride at the band's new album Love Is A Basic Need.

The LP, the band's seventh, is released today (March 2) via Cooking Vinyl and features the singles The Finish Line, Wake Up Call, Never and the title track. It precedes a spring UK tour, which kicks off at Glasgow's O2 Academy on March 28.

McNamara said the quintet had approached the record "in a more instinctive way". "I think what we've become guilty of as we've gotten older is we've started second-guessing ourselves by thinking if something's easy it can't be right," he said. "It's like a northern work ethic, where it has to be hard in order for it to be valuable - and that's not true.

"Songs come when they want. If you're impatient and you want a song to come sooner that can be excruciating - you can be waiting two years before you get one and if you want to spend every day, 15 hours a day, banging your head against a wall then you can do - but it still won't come any sooner."

"There's an art to knowing when something's going to be great and when something's not and if you listen to that instinct, you'll come out with better stuff," added McNamara. "That's been a big revelation this last couple of years. We haven't gone into the studio until we've had songs where we've thought, 'This is as good as anything we've ever done.'"

Love Is A Basic Need is the first Embrace LP since 2014, when their self-titled sixth record charted at No.5.

"I think Never is up there with [All You] Good Good People and Ashes," said McNamara. "For a band like us to be going as long as we have and still be, I feel, releasing our strongest stuff is quite rare.

"The fans seem to really love the new stuff as well. With a lot of bands, you go and see them and when they play a new song everybody goes for a piss. But fortunately that's not the case with us!"

You can watch the video for Love Is A Basic Need below: