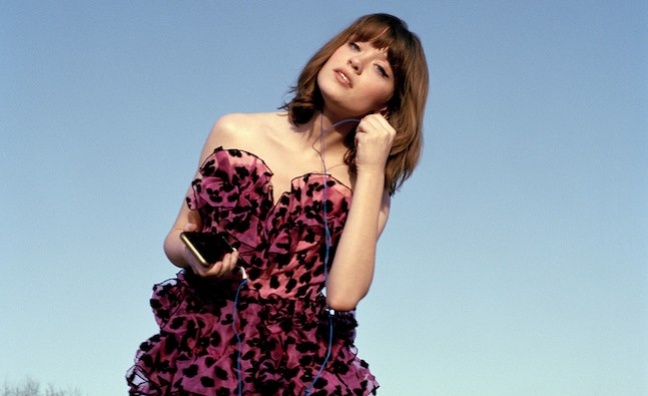 After years of buzz around her personal pop songs, Maisie Peters is set to drop her debut album You Signed Up For This.

The album is currently in a four-way battle for No.1 with new albums from Kanye West, Chvrches and Halsey.

How excited are you that your debut album is finally out?

“It's really surreal. I've been working on it for so long, it has been like my tiny baby child. I'm so proud of it. It's my favourite album, as I keep telling people, which is maybe super-narcissistic, but it is my favourite album right now!”

Why did you to sign to Ed Sheeran’s Gingerbread Man Records?

“We've known each other for a few years and we started working together last year. I mean, it was crazy, I spent the first 10 minutes being like, 'Oh, my God.' Then I got a grip and we wrote two songs in one day that are actually both on the album. He's just a combination of the nicest, most generous guy, and then also just an amazing musician and writer. And he's so quick, and just comes out with, like, 15 different things in 15 seconds and can play or say anything just perfectly. Signing to Gingerbread just felt right, we've worked with a lot of similar people, I feel like our journeys are similar and he's just been like a really great mentor.”

What was your vision for the album?

“I really wanted to write an album that reflected everything that I love, and everybody that I love and all of the inspirations and musicians and places and people that have been really important and significant. The front cover is me on the bus because up until very recently, I didn't have a driving licence. I've been commuting to London to write for the past five, six years since I was 15, with little suitcase staying in random places and being on trains and buses and tubes. These things are part of me and I wanted them in the album so that people could see that.”

You also worked with Steve Mac, among others. How was the writing process?

“I love Steve! He's the sweetest person, but he's also so talented and has such a laser sharp mind and focus. He's just a genius. I also wrote with a lot of people that I've always worked with, Jez Ashurst and Brad Ellis, Joe Rubel, Frances, John Green, Fred Gibson and Miranda Cooper... It was really fun. It's all people that I've worked with since I was 15 and 16. And it's so cool to me that the gang has stayed together and it feels like a real journey that we've been on.”

Your songwriting has always come across as being very personal, is this album the ultimate expression of that?

“It is very personal in that a lot of the songs are stories either from my life, my friends' lives or from people around me. And I think the universe of it is very personal to me. So lots of the lyrics and the lines are lifted directly from things I've said to people, or people have said to me. So it does feel very much like a part of me.”

Having always cited Taylor Swift as an inspiration, can this record put you on a similar path?

“I'm the biggest Taylor Swift fan in the world, and she’s tweeted me a few times about covers I’ve done of her songs. And then last year, myself and Griff covered Exile together. And she tweeted us both and said that she really loved it and that she was excited to see the music we make. I lost my mind, it was the best day of my life, I think nothing will ever come close. Sorry to my future wedding because it won't be as good. Will the album make me a huge pop star? I'd like to think that this record will really nudge me into the greats. But I mean, who knows? Maybe not. But I'm going to go with yes and manifest the positive energy.”