Frank Turner on repaying his 'debt' to the grassroots scene 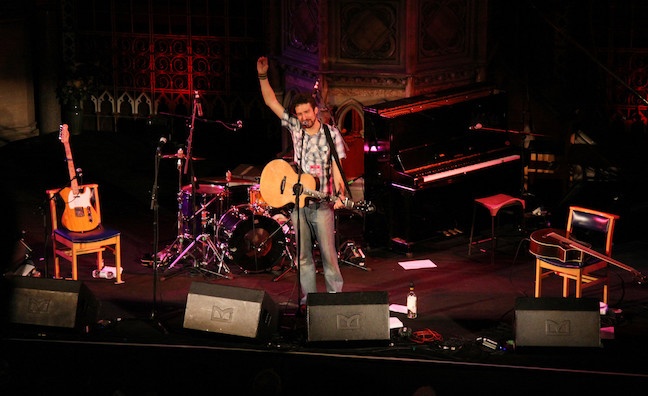 Frank Turner has spoken of the "debt" he owes to the grassroots scene after raising tens of thousands of pounds for the circuit through his Independent Venue Love livestreamed shows.

Turner has streamed live shows of his albums from his home once a week during lockdown in partnership with specific venues hit by the coronavirus crisis. Earlier this month he helped raise £40,000 for London's Union Chapel and has raised similar amounts for venues including The Parish in Huddersfield, Nambucca in London, The Joiners in Southampton, Winchester's the Railway Inn and The Forum in Tunbridge Wells.

The punk-folk singer/songwriter is due to play his latest benefit show for Dover Booking Hall live on his YouTube channel at 8.30pm tonight (May 28).

Culture has to have a space in which to exist

"On a base level it's a debt repaid," he told Music Week. “My career came up through those venues and whilst I don’t play them as often as I used to – it's generally special occasions and benefit shows and things like that – I still love them.

"Essentially, culture has to have a space in which to exist, particularly noisy types of culture, and the angle that everybody bangs on about is the fact that acts like Adele, Ed Sheeran, Muse and Biffy Clyro found their feet in those rooms. But that’s not the only thing that small venues offer – many of my favourite bands will never play to more than 200 people, but they also need a stage to exist and that is equally as valid.”

Turner is a supporter of the Music Venue Trust's Save Our Venues initiative and praised the efforts of the organisation's CEO Mark Davyd.

"I love that guy, he's amazing," said Turner. "We worked together on the Agent Of Change principle a few years back and I'm in complete awe of his campaigning skills. My role is to just be a face for gig-goers I suppose, or at least my corner of gig goers, but it's a good team and I love them very much."

Turner also spoke of his regret at having to cancel the 2020 edition of his Lost Evenings festival, which debuted at London's Roundhouse three years ago and had been set to take place in Berlin, Germany last weekend, due to the pandemic.

"Cancelling Lost Evenings this year was the biggest kick in the mouth for me, just because it's my baby and my passion," he said. "We'd worked especially hard on getting the venue right and the line-up took a long time to get right, but I was so pleased we had Henry Rollins, Catfish And The Bottlemen, KT Tunstall... It was such a great line-up, so cancelling that really sucked.

"And at this exact moment in time, in May 2020, I find it quite difficult to imagine when I'm going to be allowed to gather 3,000 to 5,000 people in a room together. I would think that time will come and it is definitely something I want to pick up again once we're able to do that, but I don't know when that will be."