Gary Barlow reveals what's next for Take That 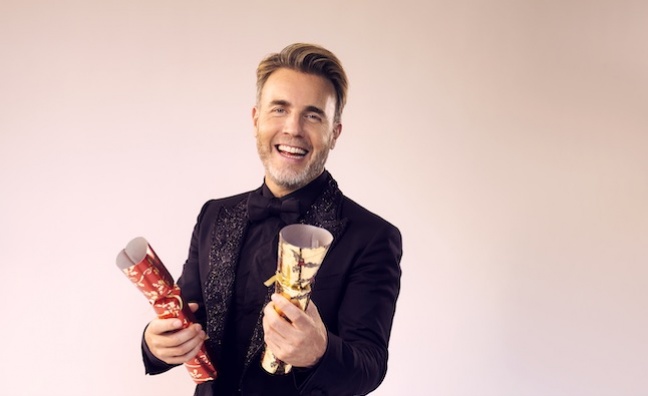 Gary Barlow has hinted at what is next for Take That following the trio's extended hiatus.

The 50-year-old singer-songwriter releases his first festive album, The Dream Of Christmas, via Polydor on November 26, which follows his chart-topping 2020 solo LP Music Played By Humans (105,051 sales, OCC).

The trio - Barlow, Howard Donald and Mark Owen - have been on hiatus since 2019’s 30th anniversary Odyssey Live Greatest Hits tour, but speaking in the latest issue of Music Week, Barlow said it was only a matter of time before they regroup.

“We haven't started anything yet, but I think we will in the next year," said Barlow, who stars on the cover of this month's print magazine. "And it will be fresh, it will be new and it will be special - it has to be. Whenever it's Take That, it has to be absolutely undeniably right for us as a group of people.

“When we did the Greatest Hits, I think it was possibly a bigger line in the sand than we thought it was going to be. We did a lot of shows that year and it felt like a celebration. It was like a lap of honour, going on the road and playing all that music, it was great.

"There were definitely a few moments in that last week where we were packing our bags and saying goodbye to each other and it was like, ‘Wow, it's the end of a moment for us, a big 30 years.’ But I'm now getting excited for what's next."

Take That’s most recent studio album, 2017’s Wonderland, has moved 234,926 units so far, according to the Official Charts Company, while their reimagined 2018 greatest hits collection Odyssey has sold 395,698 copies. Their biggest seller is 2006 comeback LP Beautiful World, which has notched up a whopping 2,913,906 to date.

But despite recording back-to-back full-length solo albums for the first time for the 1990s, he insisted Take That remained his number one priority.

"It's the thing that I value the most, so whenever we do anything it should be really well thought through," said Barlow.

“We've all been talking recently and I think this next one is a big move for us and we don't want to rush it. We have toured every two or three years for 15 years and we all wanted to break that cycle a little bit.

"We're on the hunt for something new is the short answer, I guess. We don't like staying in one place – the worst reaction to me is when someone goes, ‘I love this new one, it sounds just like Patience’ – that's a massive fail! We love to push forward and I think this is a big opportunity to do that.”

Barlow's delayed All The Hits Live UK arena tour, which concludes with two nights at The O2 on December 16-17, kicks off at the end of this month with special guest Leona Lewis.

"I'm so glad we're on tour," said Barlow. "I think the last tour we did through December was Beautiful World, which was around 2007. That was the last time I've toured in the winter and it is a good vibe - people are out, they're getting in the spirit, so it's going to be nice."

SJM Concerts MD Simon Moran, who has promoted Take That's tours since their 2005 reunion, in addition to Barlow's solo dates, described the group as a "phenomenon" on the live stage.

“Gary is a massive talent. He has lasted because of his dedication and hard work to achieve things and he can do it for as long as he wants to, which I'm sure, touch wood, will be a long time.”

Read the full interview with Barlow in the new issue of Music Week. Subscribers can click here.