Headie One and team celebrate breaking big in 2020 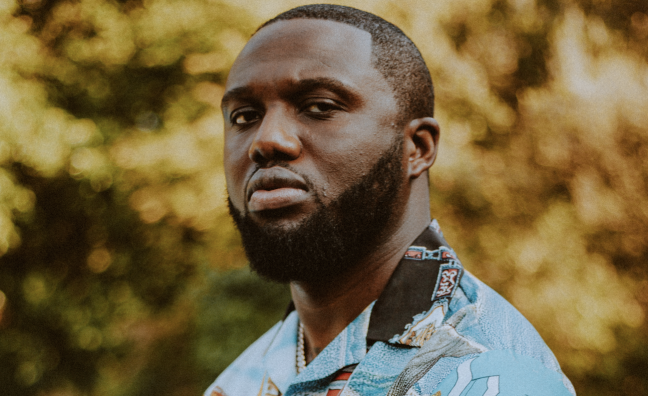 Headie One has told Music Week he hopes to provide a blueprint for rappers of the future in the wake of being crowned Breakthrough Artist Of The Year in our end of year special issue.

The Tottenham rapper stars in the new edition of Music Week alongside his team, Relentless Records and O’Division Management, plus BBC Radio 1Xtra’s Tiffany Calver, as they tell the story of his breakout year.

Headie One became the first and only UK debut act to top the albums chart this year with Edna, which sold 15,494 copies in week one.  The record is also the first drill album to hit No.1.

“It feels good to be recognised,” Headie One told Music Week. “Anything you put your mind to is possible, that’s the message I’d like to get across to anyone who wants to do anything, nothing is out of reach.”

The album is named after the rapper’s mother, who passed away during his childhood. He posed next to her grave to mark the occasion when the album hit No.1. The bulk of Edna – which features Skepta, Drake, Young T & Bugsey, Aitch, Mahalia, Ivorian Doll and more – was recorded this year following Headie’s release from prison in April.

It was preceded by Drake collaboration Only You (Freestyle) and Ain’t It Different, with Stormzy and AJ Tracey. The latter almost hit No.1 the week after Edna and is now Headie’s biggest single to date with 521,156 sales, according to the Official Charts Company.

Relentless Records senior A&R director Rob Ukaegbu said that Headie One has delivered on their aim of becoming one of the Top 3 rappers in the UK in 2020.

“It’s tough getting those tracks together and to completion, there’s lots of ups and downs,” said Ukaegbu. “Someone like Stormzy has his own schedule, so to even get him to a studio is a challenge. Thankfully, he wanted to do it and was happy to and has respect for Headie after they worked together last year. It took a while but we got there.”

Ukaegbu told us that Headie’s spot on Stormzy’s No.6 hit Audacity (286,000 sales) was key for maintaining his presence while he was in jail. So too, was his spot on Young T & Bugsey’s MOBO winner Don’t Rush (663,578 sales). “I don’t think a lot of people were aware that he was away, and then when they did find out, he was already out again,” he said.

Anything you put your mind to is possible

Edna is the sixth project Headie One has released since signing to Relentless in 2017. President Shabs Jobanputra highlighted his prolific workrate.

“It’s not just another No.1,” he said. “This is a sound of music, a person who’s had a tough background and delivered his music with authenticity, purity and clarity. It’s one of the cultural high points in music this year, I would say. That’s celebrated by this award, which we’re very happy about.”

Headie One said he relished the hard work during the recording process.

“I wouldn’t say it was intense, it was the line between easy and difficult,” he said. “I had something I wanted to say and had these things in my head, I just wanted to execute it. I wanted to be musically free and not kept in a box, I like all kinds of music and nice sounds.”

He said Edna is defined by its energy. “Everyone has an instinct and I like to follow mine and follow what feels good, that’s where you don’t really go wrong,” he said. “It’s always ended up being right for me. That’s what’s running through the album.”

Headie has started his own label, One Records, to give a platform to emerging artists. “I’m pushing through other people’s talent,” he said. “I want other people to shine through as well and be able to get out of the same scenario that I’ve been in.”

Beyond that, he wants his music to help force social change in the UK. “I want the generation coming up to be aware of the different troubles that people go through in life,” he said. “I just rap about reality, whatever’s going on in real life situations. It’s reality, so I just talk about what I see, what I hear, what I experience, it’s second nature.”

Co-manager Adnan Masud said that the rapper’s impact has been seismic.“Headie has basically changed all our lives,” he said. “The work that he’s put in has led to making a manager of myself, marketing people from the estate, branding people, people doing clothing and all other opportunities. He shed the light.”

As 2020 ends, Headie One told us that he’s focusing on new music rather than celebrating. His team marked Edna’s chart success with a trip to Greece. “We had a little chill out, ate nice food, meditating,” he said. “We ate everything, seafood, pasta, prawns, seabass, salmon... Everything really. It was good, man, I like seafood.”

Read the full interview in the magazine or online here (subscribers only). Read our On The Radar interview with Headie One here.

Get the new Review Of The Year special edition of Music Week, available now. To subscribe and never miss a vital music biz story, click here.