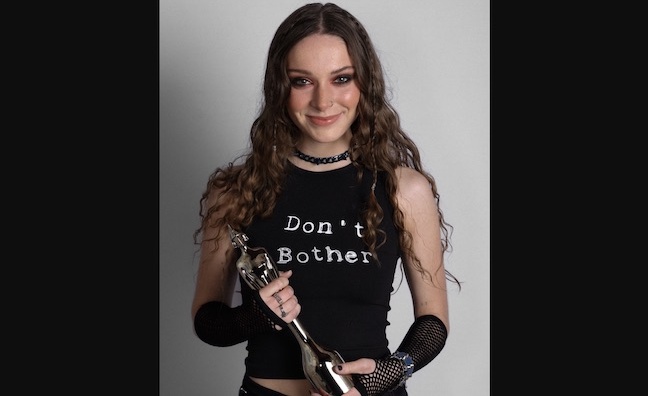 The BRIT Awards 2022 with Mastercard has announced that Holly Humberstone is the winner of the BRITs Rising Star award supported by BBC Radio 1.

The news was revealed by Clara Amfo on her BBC Radio 1 Future Sounds show.

Humberstone is also confirmed as a performer at the BRITs ceremony, which will be staged at the O2 Arena on February 8 and screened on ITV. YouTube will air the global livestream.

Holly Humberstone said: “I remember watching the BRITs with my parents each year and being totally awe struck by the artists coming together in what felt like another universe. Now to be named the BRITs Rising Star and nominated alongside two other incredible women, with the songs that started within those four walls at home is so mad. It just doesn’t feel real. This year has been a wild ride and a year of firsts, and I am so grateful and thankful for everyone who has helped make this happen!”

Over the past year, the Polydor-signed artist has been nominated for the Ivor Novello Rising Star Award with Apple Music, named runner-up in the BBC Sound of 2021, chosen as YouTube’s next Artist On The Rise, and Deezer’s Focus artist.

Holly Humberstone has performed on Jimmy Fallon, James Corden, and Later... With Jools Holland. Last month, she released her Top 75 EP, The Walls Are Way Too Thin and toured the UK and US.

The Grantham-born artist and songwriter is signed to UMPG for publishing.

It marks the third victory for Polydor in the category in four years following wins for Celeste (2020) and Sam Fender (2019).

Sam Fender has released an acoustic recording of his hit single, Seventeen Going Under, sharing the vocals with Holly Humberstone.

Bree Runway and Lola Young were also shortlisted for the award, originally known as Critics’ Choice. Since its launch in 2008, the award has successfully identified the future stars of UK music, with previous winners including Adele, Florence + The Machine, Sam Smith, Rag‘N’Bone Man, Ellie Goulding, Sam Fender and 2021’s winner, Griff.

According to the BPI, global album sales for all previous winners currently stand at over 136 million.

The BRITs Rising Star award shortlist is selected by an invited panel of music editors and critics from the national press, online music editors, heads of music at major radio and music TV stations plus songwriters, producers and live bookers.