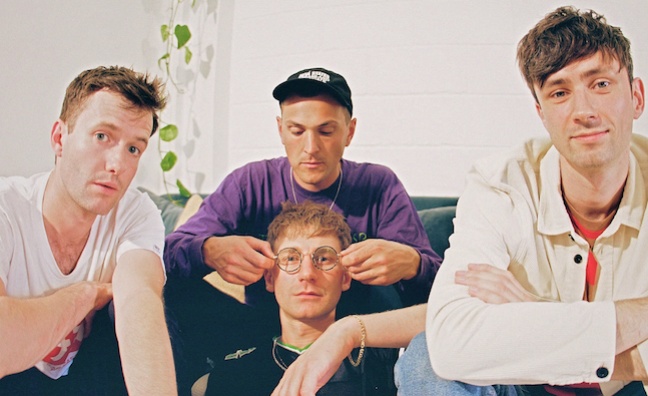 Despite the challenges of launching a campaign in lockdown, Glass Animals are targeting a Top 3 finish for their new album.

The band are currently narrowly behind Taylor Swift in the race for No.1 this week. It follows a run of singles that have helped grow their monthly Spotify listeners to 5,910,537.

Dreamland is their first album since moving from Caroline International to Polydor. The band’s return follows a period of recuperation for drummer Joe Seaward, who suffered a serious cycling injury.

This is the Polydor debut for the band – what are your hopes as they enter a new chapter?

“Glass Animals came to Polydor with a super-dedicated global fanbase, which meant we needed to plan out the campaign in a truly global way. But within that, one of our main targets was to build out their audience and awareness in the UK. We went into the campaign aiming for a Top 10 album, but because of all the hard work from the band and the team we’re looking at a potential Top 3 – very exciting and really well deserved.”

What are your ambitions for the physical music campaign?

“We’ve already sold out of a couple of formats, but have a few more tricks up our sleeve so will be pushing it right into week one. Jess Acreman, our brilliant head of commercial innovation, has worked incredibly closely with the band, management and the rest of the team to put together a strong and cohesive D2C campaign which encapsulates the needs of multiple territories, while also being in keeping with who Glass Animals are and most importantly being super fun for fans.

“One of my favourite things about Glass Animals is the world they’ve created around Dreamland – a world that extends and educates every single part of the campaign, which has meant these are some of the most beautiful and thought out physical formats I’ve ever worked on. The deluxe physical for the album is particularly amazing. The whole team at Polydor are working with the band and management to get the best result possible, we’re hugely ambitious and excited for this record.”

What’s the online strategy been during lockdown?

“Their audience is young, so we knew we had to build an exciting online experience from the beginning of the campaign. Once the pandemic hit, we spent time figuring out how we could use everything from their socials to their merch to connect with fans, and the cornerstone of this was their open-source website. With everyone stuck at home, we wanted to find ways for fans to interact with the band and the album. Dreamland is an album that’s truly shared with fans, they have been given the resources to make remixes, alternative versions of the artwork, and anything else they can dream up.

“Fred Stuart, who heads up digital for Glass Animals, sourced collaborators from around the world who helped to create this exciting, innovative and highly interactive digital world. It’s been amazing seeing the content produced not just by these collaborators with the band but also the fans.”

Glass Animals have almost six million Spotify listeners – how much has that grown since this campaign launched?

“We’ve grown by over three million Spotify monthly listeners since the start of the campaign. Glass Animals have been relatively quiet for the last few years to allow for Joe to recover from his accident. We decided to launch with Tokyo Drifting, an incredible collaboration between the band and Denzel Curry. The idea was to reignite the fanbase and open the band up to a new audience through Denzel, ahead of moving into the album campaign proper. We’ve got some exciting campaigns ready to launch with Amazon and Spotify which bring the fantastic, slightly off-kilter dreamscape that is the Dreamland visual world to each of the platforms. I’m really excited for everyone to see them and get involved.”

And is TikTok potentially a good platform for them?

“TikTok is a great platform for them and they’re really starting to explore it, seeing it as an opportunity to make some bespoke reworks of our existing singles. There’s a goofiness to the band that I think fits with a lot of communities on TikTok.”

It’s been four years since last album, but fans expect new music all the time now – will there be opportunities to drop new tunes?

“Innovation and creativity isn’t something I’ve had to worry about with Glass Animals, they’re creating almost constantly. The lockdown has given Dave [Bayley, frontman] a lot of space to work and he’s been writing, producing and collaborating. We’ve got exciting moments planned already that take us into next year and I’m sure Dave and the band will have more surprises for us.”

The band have landed on the Radio 1 playlist – what’s the support been like for the band at radio this time?

“Support has been amazing, we’ve had playlists across every track with a lot of love from everyone, it’s felt like a really nice and organic radio campaign. We’ve seen great reactions to each play as well with the singles shooting up the Shazam charts, it’s great to see such good engagement across the campaign.”

To read the full story on Glass Animals, subscribers can click here.