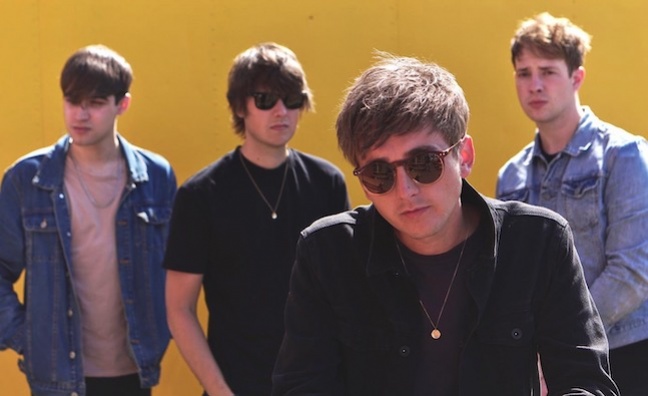 The Sherlocks are celebrating a second Top 10 album.

While the band have a proven chart track record, they’ve done it without a label partner on this campaign after exiting their deal with Infectious/BMG.

World I Understand, released on The Sherlocks own Teddyboy label, opened at No.9 last Friday with sales of 5,086, including 2,029 CDs and 536 cassettes. There were also 656 downloads and 264 chart sales from streams.

While the band have gone their own way on this campaign, they did team with trusted partners Townsend Music and Proper Music to secure the Top 10 entry.

“The Sherlocks are the latest signing to our D2C Plus model, it’s been great to see the band running their own label with the campaign hitting the Top 10 album and their online presence growing and growing,” said Bruce McKenzie, sales director at Townsend Music.

“We’ve worked with the band from day one running D2C for all their three albums with World I Understand being our best seller. Naturally, vinyl and limited edition physical formats with strong bundle offers were key, alongside additional album pre-orders we generated on their underplay club tour, giving us a strong 60% week one market share amidst strong competition. Support from indie retail was really strong with a week of great in-stores thanks to Proper.”

Alice Mills, project manager at Proper Music, said: “In-store tours are rapidly becoming a prominent feature of album rollouts as the events are a win for all involved - memorable experiences for fans and a great opportunity for stores and bands to directly support each other. As the distributor, we provide that connection between the shop and label.

“In the case of The Sherlocks, we pinpointed the areas of the country which would work best for them and highlighted key stores to partner with. The shops are fast becoming experts in this area and deserve a lot of the credit for making this record a chart success.”

The new album, World I Understand, topped the 3,470 first week sales for their previous LP.

“Obviously for an independent band like ours, it’s the physical copies of the album that really counts towards the charts,” said Brandon Crook, drummer & founding member of The Sherlocks. “We made a real conscious effort to nail the artwork and concentrated on making each format of the album special in its own right.

“We have a special bond with our fanbase, they respect the way we have always been grafters and have done things our way. All our social media communication comes from us, and it was so exciting to receive all the tweets from our fans pictured with the vinyl/CD, as well as meet them and sign their records during the in-store tour.”

As well as exiting BMG, The Sherlocks have had a line-up change following the departure of founder members Josh and Andy Davidson. Kiaran and Brandon Crook opted to keep the band going and recruited two new members, guitarist Alex Proctor and bassist Trent Jackson.

“The way our incredible fans pulled together to help achieve this UK Top 10 was amazing, and we want to once again say a massive thank you to every single person who bought or shared any news about our new album,” said Brandon Crook.

“To release the album on our own record label and achieve what it did was very empowering - and we hope it serves as an inspiration to any upcoming band or artist. That you can achieve anything with hard work and dedication. We have found our home in Teddyboy Records, and we are looking forward to getting in the studio recording album four!”