"I don't want to do this to get famous": Lukas Nelson on A Star Is Born, working with Neil Young and his brilliant new album 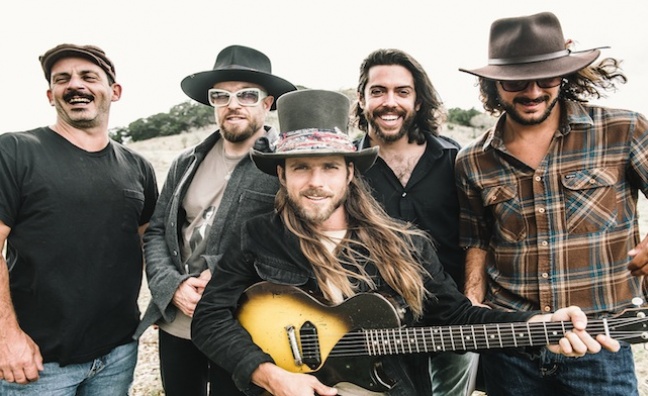 In the new edition of Music Week, we speak to Lukas Nelson about his extraordinary career so far. The son of country music legend Willie Nelson, Lukas has been making waves for years now: not only has his group Promise Of The Real toured and recorded albums with Neil Young, he’s also released stunning LPs bearing his own name, including last month’s Turn Off The News (And Build A Garden).

On top of that, he was also Bradley Cooper’s secret weapon on A Star Is Born. “There is no Jackson Maine without Lukas Nelson,” stressed Cooper in interviews, explaining the source of the film’s acclaimed character. The Hollywood actor/director not only drew on Lukas Nelson’s prodigious musicality for inspiration, he also recruited him as a musical consultant in the pre-production process. It was a role that would blossom into Nelson eventually writing eight songs for the blockbusting film and a role playing the guitarist in Maine’s band.

Today (July 12) Nelson returns to the UK with Promise Of The Real to join Neil Young onstage at Hyde Park. And in our interview, Nelson praised Young for taking POTR under his wing.

“The greatest event in the band’s career has been working with Neil,” said Nelson. “It validated our belief in ourselves. I think Neil knew exactly what he was doing. He inspired us to just be the best we could be and put us on a platform where we knew we had to rise to the occasion, so to speak. I’m confident and grateful to say that everybody in the band did. Since that moment, opportunities like A Star Is Born and all these different learning experiences have come. Everything since has been icing on the cake.”

Despite the huge success of A Star Is Born, Nelson stressed that when it came to recording Turn Off The News… he didn’t make the make the album many might have expected from him at this point in his career.

“I could have created a very pop, mainstream-sounding record and got a different producer for each song and not have used the band,” says Nelson of Turn Off The News. “That’s one of the traps that you can get into. But is that why I want to do it? No. I don’t want to do it to get famous, I want to do it because I believe in the people that I’m playing with. I knew there would be so much attention on me after A Star Is Born and people were going to say, ‘What are they going to do next?’ I think this record best sums up who we are as a band and what we stand for.”

As to the message of the album – which includes some big guests stars such as Neil Young, Willie Nelson, Kesha, Sheryl Crow and Margo Price – Nelson explained the peculiar title of his latest release.

“It was an epiphany,” he told Music Week. “I remember I was at home and there was news all around. I think it was something about North Korea that really scared the shit out of me and I realised that, ‘OK, this is going to be a daily occurrence and I’m just going to be paralysed with fear and feel like everything is hopeless if I keep watching this'. I want to stay informed, I know I’m going to know the right things to know just from being in the community I’m in, but this constant barrage of media is counterproductive to actually getting anything done. That’s the point of the record. There is a yin and yang in this world, there’s positive and negative. We’re always going to have negative and we’re always going to have positive. I’m just a flesh and bone creature, I don’t even know what we’re doing here, all I know is that I have to make the best of my situation and I have to be the best person I can based on the cards I was dealt.”