Inside the big chart battle between The 1975 and KSI 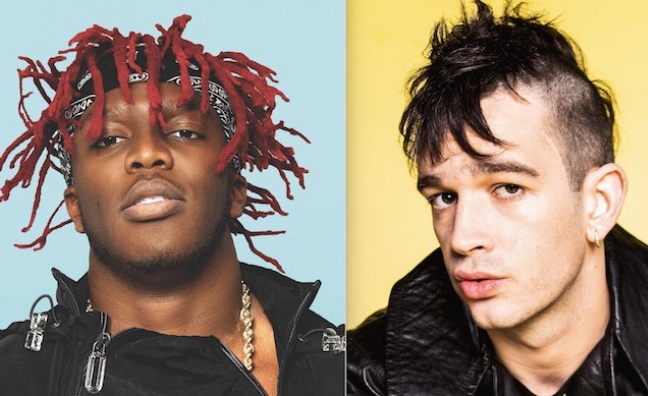 It’s not often you get a proper old-fashioned chart battle these days.

KSI was clearly up for it last week, as the YouTuber, boxer and rapper baited The 1975 and the band’s fans during a hotly-contested chart race. KSI’s debut album Dissimulation (BMG) dropped just ahead of his appearance on Music Week’s cover.

In the event, The 1975 – whose frontman Matthew Healy also graced Music Week’s cover last month – finished clear despite a strong performance by KSI. Ultimately, it was a fascinating contest between a physical-focused band and a streaming star with a huge social media following.

By the end of the chart week, Notes On A Conditional Form (Dirty Hit/Polydor) was No.1 and 6,763 sales ahead. According to the Official Charts Company, the band’s fourth consecutive No.1 album moved 34,245 units, of which 24,476 were physical copies, along with 2,656 downloads and 7,103 streaming-equivalent sales.

Polydor will be happy with another chart victory, following 2020 No.1 albums from Eminem and 5 Seconds Of Summer. It will also be aiming for consecutive chart-toppers, with Lady Gaga’s Chromatica targeting No.1 this week. And it has Paul Weller to come later this year.

The 1975 help Polydor to a clean sweep in the week’s Top 75 chart shares: the company is No.1 on Singles, Artist Albums and All Albums.

But BMG will also be pleased with a strong second place for KSI. Dissimulation was the No.1 streaming album, No.1 download album and No.1 independent album. It also made No.1 in Ireland.

Thanks to KSI, BMG upped its weekly market share as a corporate group for All Music Artist Albums to 2.4%. While it remains No.4, the company’s share has increased from 1.5% in the prior week. As a label, BMG rockets to No.2 (11.5%) for the weekly market share of Top 75 albums.

KSI’s manager Mams Taylor said, “I'm a sucker for an underdog story. I was fully aware of the perception people had of KSI as an artist but I also knew what he was capable of and how we would change that perception with hard work and good music. This is just the beginning, watch!”

KSI said: “Hard work pays off. I'm lucky enough to love what I do and to do what I love. I'm honoured and grateful that people are enjoying the album so much, I've been focused on it a lot and on making music in general. I have a long way to go but for now I'm going to take a second to celebrate how far I've come.”

BMG UK VP of Marketing Gemma Reilly-Hammond described KSI as "a unique talent in so many fields, a truly 21st century entertainer”.

Brian Shafton, SVP Record Music BMG LA and RBC Records co-founder said, “When we first started this process some six months ago, we had an impending boxing match against Logan Paul where Las Vegas had us as severe underdogs. KSI defied all of the oddsmakers to win the fight. That was a defining moment for us. Every step of the we have defied the odds and had success beyond what we even thought was possible."

The 1975’s and KSI’s fortunes were reversed on the singles chart.