'It's important not to lose the song': Rick Astley on remaking his hits for his new Best Of collection 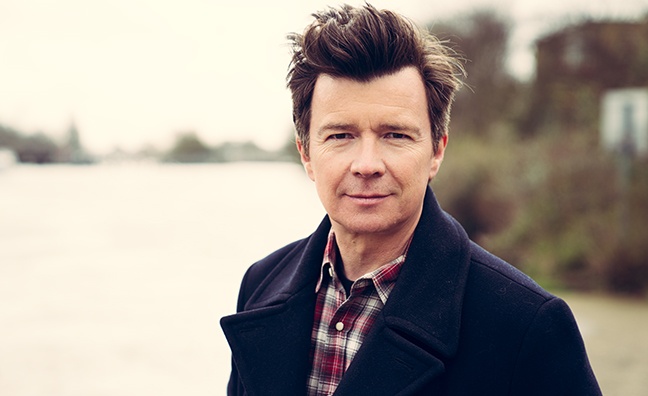 In the new issue of Music Week, the one and only Rick Astley tackles the Aftershow to take a look back across his career. And it’s a timely thing to do. Three years on from scoring a surprise No.1 album with 50, last week Astley enjoyed a Top 4 hit in the UK album charts with his new greatest hits set The Best Of Me – which notably includes a disc of surprising new interpretations and re-imaginings of songs like Never Gonna Give You Up.

In the feature he reflects on his career’s remarkable second wind, his label BMG and his unlikely union with Foo Fighters among much more. Here, in an unread extract of our interview, Astley offers more his memories and life lessons from his time in the music biz…

How does it feel to have all of your work in one place and what have you put into this new greatest hits set?

“On the one hand, in the world we live in, it’s a bit weird because pull up a streaming site or YouTube and you can hear, if not see, every piece of music that’s ever been recorded. So it’s a bit weird releasing the Best Of, especially in a physical format. I said to everybody, ‘I need to record at least one brand new song’ – so we've done that with Every One Of Us and I'm really happy with that. But I also said we need to have a go at re-recording a bunch of songs – we have to do something else. For the physical version, we've got two CDs, one with all the old tunes the way they were recorded back in the day and then 11 songs of newer versions of old songs.”

The new stripped back piano version of Never Gonna Give You Up is particularly surprising, it’s a bit like Mad World by Gary Jules…

“That’s a good comparison really because if you listen to the original of that song, it’s nothing like it. But melodically it is, you can sing along to it quite comfortably. Never Gonna Give You Up’s been around for 32 years and so I don't really want people who like it feeling I ruined it – what I wanted was something where, if they want to sing along with the new version in the car, they can. That’s pretty much what I've done with almost all of the re-works. It's important not to lose the song. I’m really happy with it.”

Never Gonna Give You Up is your calling card – but is there a song you’d rather be known for?

“It’s still my calling card and it always will be. That's never going to change. I don't think there are many artists in the world, from Elton John to Slipknot, who are going to change what certain things mean to people because the more it’s a part of your life, the more invested you are in it – and so the older it gets, the more invested you are. With Never Gonna Give You Up, that's what people associate me with. If they ever do remember me, or I’m brought up in conversation and their memories are jogged, that's the one they're going to go. I’m alright with that. I think if I didn't have those songs, especially Never Gonna Give You Up with the way it had a return on the internet, no one would have been giving me the time of day to allow me to make a new record and release it…”

People would probably see my biggest risk as leaving Stock Aitken Waterman, but I was alright with it... I was so lucky to sell that many records, I didn't feel I needed to sell any more

Looking back across your whole career like, what do you think the biggest risk you ever took was?

“Oh my god… I don’t know if I took any [laughs]. I think the biggest risk in a lot of people's eyes was leaving Stock Aitken Waterman, but I didn't see it as a risk because we sold literally millions and millions of albums. Financially, I said to myself, ‘I don't need to make money out of music ever again.’ I wanted to make a record that, when I’m old and gray, I could play to the grandkids and go ‘That’s my record’. Don't get me wrong, I’m quite happy about the Stock Aitken Waterman years, of course I am. But I think that the record Cry For Help is on for instance (1991’s Free) was a totally and utterly different record. It’s still pop music, of course, but there are real drummers on it, there’s a choir on that record, Elton John played piano on it. I’ve stood in A&M studios and looked at some of the finest players in the world playing my songs. I knew that I would never get a chance to do that with Stock Aitken Waterman. But I also knew that the chances were that we weren't going to sell the same amount of records. I think that’s what people would probably see is my biggest risk, really, leaving Stock Aitken Waterman, but I was alright with it. I was so lucky to sell that many records – I didn't feel I needed to sell any more. I would have loved to sell 10 million albums every time we put one out, but that wasn’t what I was about. I’m not daft enough to think that I would have that attitude if the Stock Aitken Waterman albums had sold a couple hundred thousand – I’d still be thinking, ‘C’mon!’ But I’d done it, really. It’s a weird one, when your first single is No.1 fricking everywhere, it just sets the precedent of, ‘We're never going to do that again.’ Never Gonna Give You Up was just freaky. It was weird. It was a moment that the right amount of fairy dust just fell on that situation and, boom, that was that. I’ve had one of those moments twice because I recorded 50 in my garage! Obviously, it’s not on the same scale, but sometimes things come together. You can't plan them. You can't design them. You can't even buy them. You can't do it. They just happen and that’s what Never Gonna Give You Up was, and in a bizarre way, it gave me an early sense of freedom.”

You’re currently signed to BMG – why does that relationship work so well?

“Sometimes, from a distance, if you look at the Sonys and Universals of this world, yes they’ve got a lot of power and this, that and the other, but they’ve also got a lot of artists that are actually competing with each other. There's only one Saturday night that week where you can be on whatever show it is. That’s nothing against Sony or Universal, they are enormous, [but] I do sometimes wonder, well, how many records can you put out in a month and not let [some] fall through the crack? But then again, they've also got a lot of power and sway because they’re that big. But you want connection with the people who are working on your records: you want them to feel that is the right photograph, the right marketing or whatever. I think the record labels of yesteryear just threw money at everything sometimes, and it's just not the way to do it. That’s not the real world anymore. You’ve got to really believe in your methods, believe in your artists and make sure you’re both on the same page. I really feel like that with BMG. Alistair Norbury joined BMG roughly the same time I joined to release 50 and I don't feel like I'm having lunch with the record company boss, I feel like I’m having lunch with a friend. That’s how I feel. Perhaps because of my age, I'm 53 years old, I don't feel like a kid anymore who is being brought in front of the headmaster! I have a lot of respect for the people at BMG because I think they go about it the right way. I feel they've got belief, that's one of the strongest things is that you actually feel that they believe in you.”