Slipknot on their new record, streaming and why they're not resorting to covers to score hits 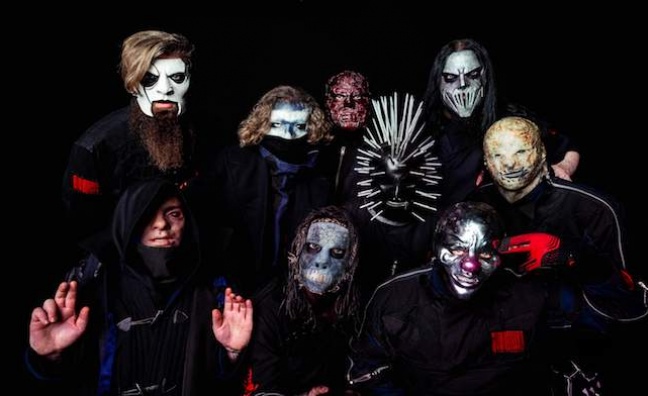 Last Friday (August 9) Slipknot released their new album We Are Not Your Kind via Roadrunner Records and are currently sitting on top of the midweeks album charts, beating the formidable likes of Ed Sheeran and Lewis Capaldi.

In our huge June cover feature on the metal titans, frontman Corey Taylor, percussionist/creative mastermind Shawn ‘Clown’ Crahan and long-term manager Cory Brennan of 5B Management give us the incredible story of their past 20 years together and the making of their new album.

In our cover feature, Clown called out the phenomenon of rock acts turning to covers as a way of scoring hits.

“You gotta give me a break,” he sighed. “You can’t write your own fucking songs? You want to make someone else’s genius song horrible?”

Here, in an unread extract from our cover feature interview, Corey Taylor and Clown take us further inside their comeback campaign, streaming, and why we won’t be seeing a Slipknot covers album any time soon…

Regarding your take on covers, some would say it’s scoring an easy streaming hit…
Clown: “I’ll give you a funny story. We’ve always been approached to do a cover album. People bring it up, like, ‘Heeey, want to do an album of some cover songs you like?’ Paul Gray [Slipknot co-founder and bassist, who tragically passed away in 2010] was always an advocate, he wanted to do it. Not to diss Paul or anything, but he wanted to cover some of his favourite songs – it could be Slayer, could be Dead Kennedys, whatever. He wanted to do things he loved, but it seemed more natural to what we’d do anyway. So I would always battle him and say, ‘Look, I’ll agree to do it as long as each guy in the band gets to pick the songs he wants…’ (laughs).”

So what was your choice?
Clown: “Mine was going to be Do You Really Want To Hurt Me by Culture Club (laughs). Think about that song really slow with all our psychotic noises and Corey Taylor very demonically going, ‘Do you reeeeally want to huuuurt me?’ Paul would look at me like, ‘No.’ He liked Culture Club, but he was like, ‘No…’”

Corey, what can you tell us about the making of We Are Not Your Kind from a lyrical point of view?
Corey Taylor: “From my point of view, it is the story of one of the darkest times in my life, basically. It was tough to live through so it was equally tough to sing about. But at the same time, it was important to document. That’s what I’ve always done: embrace the darkness and document it so I can let go of it. And if I can’t completely rid myself of it, I have to at least admit that I have it.”

Did you learn anything about yourself?
Corey Taylor: “Yeah, actually I did. I learned that I’m not always right. I learned that in my search for who I want to be, I gave up a lot of who I was…”

That’s a big realisation…
Corey Taylor: “Absolutely. Sometimes you wake up and realise your life is slowly killing you. And it’s not a good feeling (laughs). It’s not. It’s especially not a good feeling when you know you’re susceptible to alcohol, drugs, things like that. It’s tough, man. It’s one of those things where you have to be honest with yourself. The one thing I can say that I’m most proud of is that I didn’t give in. I never relapsed, I didn’t do anything like that.”

What’s your take on the industry you’re returning to, five years on from your last album?
Corey Taylor: “It’s completely different. I’m not just talking about rock and metal, I’m talking about hip-hop, pop – anyone who tries to make a living making music. As long as these streaming companies are allowed to fucking pay us the way they do, there’s no way we’ll be able to make a living doing this. Especially if you have a family, for fuck’s sake. If the streaming companies are made to pay us fairly, then there’s a chance. But there’s nothing that says they can’t come up with another way to basically fleece us. The thing that really bums me out is that the labels have been OK with it because they’ve been making money off it. The labels make money on the streaming, the artists do not. And they think it’s OK to feel good about the fact that, ‘Oh, that means we have more money to put into you!’ That doesn’t mean we’re making any fucking money, that just means we have to pay you back more money. It’s the old style all over again, but now you’ve been put into these contracts with lower fucking percentage rates so it takes us even longer to fucking pay you back (laughs). It’s a broken fucking system.”

So do you do like streaming or see it as a necessary evil?
Corey Taylor: “I mean, it’s a tough situation, but that’s not a reflection on whether streaming is good or not, that’s a reflection of how lazy people are when it comes to how they listen to music. People are making music and mixing it specifically for half inch speakers that barely fit in your fucking ears for Christ’s sake. I want to feel my music.”