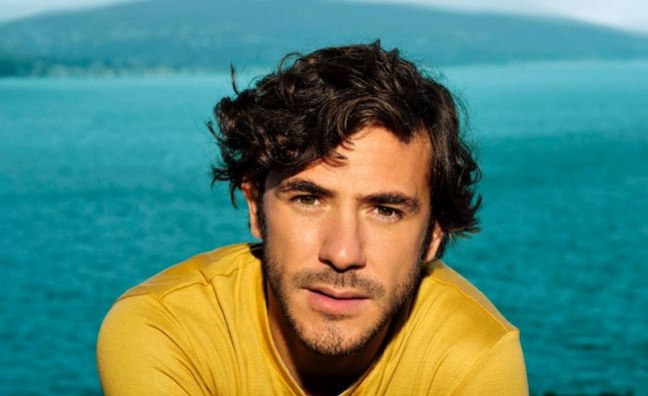 A year ago, Music Week broke the news that Jack Savoretti had signed to EMI.

This week he’s set for a No.1 album with Europiana, his first for the major. The LP was ahead in the most recent Midweek Sales flash with sales of 17,078, according to the Official Charts Company.

“I followed [A&R] Thomas Haimovici, who signed me many years ago to BMG,” Jack Savoretti told Music Week. “Meeting Thomas was a big change in my career, because it took a French guy in England to understand what I was trying to do. So when he went to Universal, it was a no-brainer for me.”

“I’m so glad that Becky Allen has now been made captain of the ship,” said Savoretti. “I’ve known her work from the past and stuff she’s done with her previous label. I’m a huge fan of Imelda May, a friend and a fan, and their work together has been amazing. She just gets it.”

Despite his recent success topping the charts, playing arenas and collaborating with artists including Kylie Minogue, the singer-songwriter has yet to make an impact at the BRITs or other ceremonies.

Does Savoretti feel that he gets the respect he deserves at this point in his career?

“By the industry, no,” he told Music Week. “On a daily basis, I get little things that happen to me so I’m like, ‘This is great’. Personally, I feel totally at peace and like we’re smashing it. Do I feel that’s reflected in a commercial sense and all that? No, I don’t really. But I don’t feel like I’m lacking it.”

During the previous campaign, Savoretti played a headline show at SSE Arena, Wembley.

Danielle Livesey, who manages Savoretti alongside Niko Michault, told him from the beginning that one day he’d be doing venues that size.

“It was incredible,” said Livesey. “Now he just wants to build on that. More arenas, bigger tours, across Europe, America. We really want to build on Germany, and France is a big target for us and really to have Europe to be running as it is in the UK.

“There’s a big ambition there. We’re loving the journey. It’s been long and steady, but you’ve just got to keep on growing and keep on evolving.”

Savoretti is proud of his new album, which is influenced by Euro-pop icons and crooners past and present, including Serge Gainsbourg, Phoenix, Julio Iglesias, Patty Pravo, Gipsy Kings, Daft Punk and ABBA.

“The fact we tried to start something, it gives me a bit of a buzz and it makes me want to push this as much as possible,” he said. “There’s some amazing music coming out of Europe right now and some really cool sounds that need more exposure.”

Subscribers can click here to read the full interview with Jack Savoretti, Rebecca Allen and his management team.