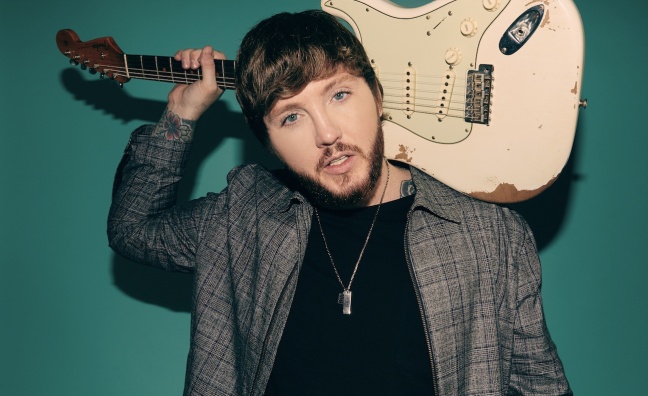 James Arthur has told Music Week that he’s fighting for the respect of the music industry as he prepares to return with a new record.

As revealed in the brand new edition of Music Week, out now, Arthur has signed to Columbia UK, in collaboration with Columbia Germany, for his fourth album, which will be trailed by the release of a new single in March.

Columbia president Ferdy Unger-Hamilton said the label is proud to be working with the former X Factor winner, who told Music Week he wanted have a UK base for his latest album campaign.

“James has proved himself to be a brilliant songwriter over the last few years, and we regard ourselves as being really fortunate to get the opportunity to work with him,” said Unger-Hamilton. “He has a fantastic album in the pipeline, expect 2021 to be a big one for him.”

An agreement had been made to work with Syco, which then ceased life as a frontline Sony label. Arthur continued to work with Tom Overbury on A&R for his new album after the Columbia deal was signed. “I had a good relationship with people at Syco, like Tom Overbury, who is a vital, vital part of the album,” Arthur said. “When Syco stopped I became a free agent, up for grabs for the other UK labels, and Ferdy wanted to sign me and got in touch. So did RCA, and for a few weeks I felt like an NBA basketball player and they were trying to get my signature, they were sending me gold-plated lighters and things like that, I was loving it [laughs]. They’re both amazing labels.”

Arthur, who was in the middle of making TikTok videos when Music Week called, feels energised by the deal. He made his album last year at his home studio, working alongside previous collaborators Red Triangle and Andrew Jackson, as well as Yami, who co-wrote The Business with Tiesto.

Arthur told us he’s ready to mix it in the TikTok age, having been handed a gift when his hit Train Wreck went viral on the platform. “I was lucky with that, I didn’t have to do any crazy dances or trends or anything,” he said. “An old song of mine got taken by the TikTok kids and thankfully I’ve got a ready made fanbase on there now so I can keep going.”

“I rememebr the old school, the way the music industry was with printed CDs and stuff,” he continued. “It’s just changed now, it’s straight to consumer. You make something and it can be online within minutes. You’ve got to grab the positives from all that instead of staying stuck in the past.”

While Arthur, who won The X Factor in 2012 and was the first winner to notch two million-selling singles in the UK, is keen to move on from the past, he feels his catalogue warrants respect. Say You Won’t Let Go, his biggest UK single, has 2,676,756 sales, according to the Official Charts Company, and has passed the billion count on Spotify and YouTube. Impossible has 1,940,010, and both topped the charts. His next biggest single is Naked (730,347), followed by Can I Be Him (652,698) and Empty Space (534,441). He topped the albums chart with Back From The Edge (415,705 sales) and hit No.2 with both James Arthur and You. Now though, he wants to eclipse all of that with his new material.

Here, the singer talks to Music Week about his new album and the forces that motivate him to succeed in the music business…

Tell us about the new record, how long has it been in the works?

“I’ve not been sitting on the songs at all. It’s very different to any other process that I’ve gone through in making a mainstream album. Normally, major labels want you to go to LA and do the whole studio-hopping thing, one day you’re with one producer and another one the next. I’ve never really enjoyed that, to be honest. I’ve found that it doesn’t make for a cohesive body of work.  I moved into a house a month before the pandemic and got a studio set up going, luckily. Then, when things started to ease off a bit last year I managed to get together with some collaborators I’ve worked with in the past and some new people who were up for coming and doing socially distanced sessions. We just started to see what we could get out of it.”

How did it take shape?

“There was a definite genre or lane I wanted to do, which was mixing rock, guitar-based stuff with trap, hip-hop and pop. This record just came together within two-and-a-half months, 50, 60 songs were written. It just felt really good and sounded good. The fact it was all done in one spot, in my house, made it a more comfortable thing for me. It allowed me to be a bit more vulnerable and project all the things I was going through personally into the music. It’s probably the most honest piece of work I’ve done. It’s a clichéd thing to say every time you’re bringing out a new record – ‘This is the best one yet!’ – but I genuinely feel like this is. I was so comfortable in making it and normally I’m not, really. I don’t really like the clocking in, clocking out, different studio every day thing, there’s obviously certain anxieties that come with that.”

How does it feel to be signed to Columbia in the UK now?

“I met Ferdy and he really impressed me and obviously the roster speaks for itself, some legends of music have come from Columbia. It’s an honour to be asked to work with them. I hadn’t really felt like we’d kicked on too much since the success of Say You Won’t Let Go and I saw other people that were in my lane capitalising on stuff and really milking it and I was like, ‘We’re not really doing it, we’re sitting back a bit too much and I want to take it up a level’. So I kind of kicked up a bit of a stink about getting the UK label to be my home label. There was just something about the prestige of Columbia that made me want to go there.”

What is the story of this record?

“There’s kind of one narrative with me, how I’ve struggled with my mental health, childhood trauma and all these things. I’m a bit bored of talking about it now. But there was something different about this one. As it went on it became clear that this was a really reflective album. Like a lot of artists during the pandemic, I was forced to focus on music. I think a lot of artists probably enjoyed the fact there wasn’t a gig on the horizon or a TV performance or whatever it may be. Certainly, for me, it felt a bit of a luxury to focus on myself and the music and to process everything that had been going on in my life for the last eight years since winning X Factor.”

“I’d just started some proper therapy before the pandemic. We’d cancelled a load of shows in America because I was at a point where I was about to be shipped off to rehab in Nashville to address trauma that had happened when I was a kid, because I just kept getting to this point where I was having breakdowns, whether it be on the road or… I kept hitting a wall in my life where the anxiety of the stress was getting too much for me. In the first few months of lockdown, I tried medicating, I ate what I wanted, played video games, and got to the point where I was sick of that and I cut all that out and said, ‘The best way for me to process things is to make music.’ It feels like a coming of age thing, this album, like I went from being a boy to a man on it. I get really, really personal, I talk about how I didn’t want to wake up some days. It was just me pouring out how I’m feeling, looking in the mirror and trying to make sense of it all.”

Other people come along who are in my lane, doing a similar thing to me and get treated like it’s the second coming of Jesus

How do you feel about where you’re at in the music industry now?

“I’m at a point where I’m happy with how I’m making the music and the level of control I have over it. I’m really happy with how I’m progressing as a musician. I think I will always find it difficult to navigate the media side of it. The X Factor thing is a big part of the narrative and it’s your job to ask me about those kinds of things, but sometimes it’s annoying that it defines me in some ways. I’m still fighting to get that industry respect. I think I have to work twice as hard as everyone else because of where I’ve come from, and everything I make has to be a banger in order for it to really cut through. I don’t feel like they really want me to win, you know [laughs]? I’ve got to go to the radio with bangers otherwise it’s like, ‘Nah, we’d rather play Lewis Capaldi or this person…’ I’m cool with being the underdog, I’m happy with that and it gets the best out of me, but I’d be more content if I started getting those BRIT and Grammy Awards, not that that’s what it’s about, but I feel I’ve earned my stripes at this point. I’m going for those things, going for all the belts as they say. I’d love to beat all of the things I’ve done. Other people come along who are in my lane, doing a similar thing to me and get treated like they’ve pioneered this genre or like it’s the second coming of Jesus [laughs]. I’ve just got to keep being prolific, keep doing it and the credit will come.”