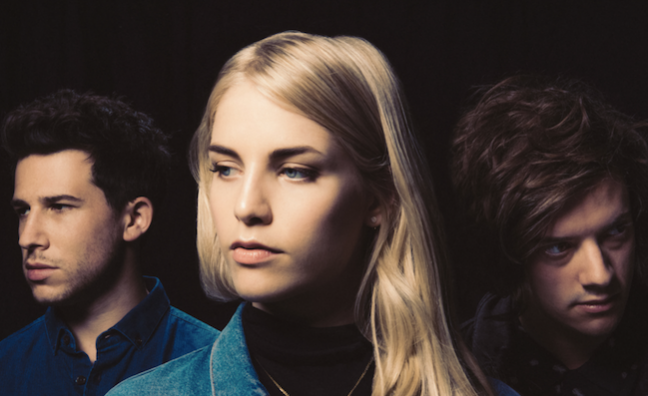 Jonathan Dickins has told Music Week that London Grammar are moving up a level ahead of their third album.

The trio, signed to Ministry Of Sound, hit No.1 with Truth Is A Beautiful Thing in 2017 and were in the process of completing its follow-up when lockdown intervened.

Truth Is A Beautiful Thing has 218,046 sales, according to the Official Charts Company, while its predecessor If You Wait, which peaked at No.2, has 738,838.

September Management founder Dickins emphasised the benefit of the band’s global fanbase and said that a slew of syncs during lockdown – including a spot on Normal People for Hey Now – could help to lay the groundwork for their return.

Read Dickins’ thoughts on the music business in lockdown and the latest news on Adele’s comeback here, and get his thoughts on London Grammar, Ministry Of Sound and more below.

How has lockdown been for the band?

“The new music is going to come when it comes, if I’m being dead honest. There’s stuff we’re doing behind the scenes in getting ready, but it’s only really been recently where the band could even interact with each other in person. Sync has been really important, they’ve always done well with sync, they just have that sound and Hannah has a world-class voice, the music works. Every day there’s something going on with sync, we’re Top 30 on Shazam in Italy with a sync, or Top 10 on iTunes for a sync on Normal People. To see a record, off one strategic placement on a very popular show, react how it’s reacting, I hope bodes well for new music and [suggests] there’s an appetite for their sound and Hannah [Reid] and her voice. There’s an element of luck in all of these things, but I’m hoping those syncs and these little things are a reminder to fans of London Grammar after two or three years out of the marketplace.”

Why is Ministry Of Sound the right label for the band?

“I don’t know if there’s any such thing as right or wrong labels. I know you sometimes sign to the culture of the label, but with the greatest respect in the world, I don’t know if there’s culture in massive record labels, by nature of them, they do everything, so I don’t think there’s a culture there. But what you look for, regardless of whether the label is big or small, is people who are passionate and committed to the band. Bands want to feel heard, supported and listened to. That’s what I’m looking for and the band get that with Ministry. I’ve never really wanted to create a culture as a manager where it’s an ‘us and them’ situation. ‘We do everything and fuck the label because we’re so great,’ you know managers can get a little like that? People should feel good about the projects they work on. When I’m doing a key team meeting with Ministry, every one of those six people is engaged.”

Why are you excited about their future?

“I think they’re getting better. They’re one of those bands that is getting better, and I don’t always think you can say that. There’s always been an argument that, as bands release music, I think they get worse. This band is getting stronger. They’re a real development band. I don’t just mean stronger in terms of music, but in terms of their knowledge and the things they’re seeing, the way the mechanics of the band operate, caring more and being much more focused visually on what they do. It’s encouraging to see them develop step by step.”

What do you put that down to?

“A lot of it is down to the band. I’ve always been a manager that manages, that means that we’re always prepared to have real conversations and challenge each other and experiment. I’m a big believer in experimentation; if they don’t work you don’t put them out. You have to try new things. They had a very strong idea on this record of what they wanted to do and how they wanted to go about it, I plugged in a little bit and Dipesh Parmar, as the boss of Ministry and really their A&R guy, has been very hands-on with them too, so it’s a little combination. The art of all of this is trying to sign the right artists [laughs]. I’m not saying we don’t add value, because we all add value, but I don’t think you can turn shit into ice cream. Any band that achieves any sort of success, you’ve got to think that most of that is down to the quality of what that band is producing and I don’t have an ego that thinks I’m that important and that the stuff we’re doing to it is going to make the difference.”

Subscribers can read our Ministry Of Sound cover story here. To subscribe and never miss a music biz story, click here. Make sure you can access vital music biz information wherever you are by signing up for our digital edition here.