Kae Tempest on 'celebratory' new album The Line Is A Curve 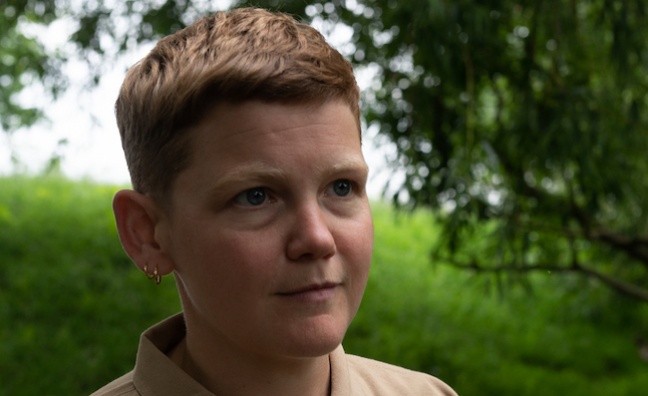 Kae Tempest's fourth album, The Line Is A Curve, is out now via Fiction and pushing for a Top 5 finish.

Here, Kae Tempest tells Music Week about their creative process, personal identity and the track described as a "declaration of love" for Britain...

While you were working on The Line Is A Curve, your adaptation of Philoctetes by Sophocles was staged at The National Theatre, and you published a book called On Connection. You’ve described these works as being part of the same constellation. How did they influence each other?

"Often, by the time something comes out, I will have been working on it for quite a long time – or it would have had its roots planted while I was working on other things. So Paradise, the adaptation: I was working on that for a few years; and On Connection I worked on pretty much in lockdown number one. I think I just finished On Connection as this album was taking shape in demo form. So all of the three things, they share some space, and they have a way of informing each other as I'm making them. It's just quite natural and instinctive. I know they're separate projects, and they're completely different forms, and they have completely different tones, and they make completely different requirements of me. But there's something about where I'm at in my life, where the world's at, and the thing that we've all just gone through over the last couple of years, that gives them all a commonality. I feel like they belong with each other in some way. But also because they're all published under my new name, and it's about coming out. It's something that feels a little bit truer to me right now.”

How has changing your name and pronouns impacted your thinking about identity?

“It's definitely something that is huge in my life. I find myself working it out through the things that I'm making. Paradise was an amazing opportunity to explore what happens when you have these ancient characters, and then you bring them into the present moment. Suddenly, these very old stories are about things that are happening to us all right now. It was an amazing way of getting some fresh perspective on where we're at.”

I feel all of this emotion about Britain and I wanted to celebrate that, and also pull out some of the more difficult resonances and frequencies that exist here

How does your management, Wildlife, react when you tell them you have a new project? They must be thinking to themselves, 'Is it a book? A play? A record?'

“They're absolutely fantastic, my management. Above and beyond, they have sorted my life out [laughs]. I can't even go into it, but just believe me. I can't imagine what I'd do without them. They've been fantastic. This campaign is the first one that they've really been able to get their teeth into because when I joined with them the last campaign had already started, so this is our first proper go at it together and it feels really good.”

You released Salt Coast, an elemental track from The Line Is A Curve, as part of the album campaign build-up. What made you pick that track?

“It's like a love letter to Britain that song, for me. I feel all of this emotion about Britain and I wanted to celebrate that and also pull out some of the more difficult resonances and frequencies that exist here – but also make a declaration of love to this island because I really love this place. I love the soil, I love the cliffs, I love the air here, I love the sky. And this is where I'm from. So I just wanted to sing about it. It's beautiful. I absolutely love Salt Coast, it's one of my favourites on the record. I think it will be good for people to hear something so celebratory about Britain.”

One shouldn't pull out single lines, but I love your lyric 'tastes like the feeling of pizza'. It's inherently contradictory but makes so much sense. Will we see it on T-shirts, perhaps?

I've heard that you recorded the album for three different audiences of different ages. Were they actually in the room or imagined?

“No, they were there! I wanted to do the entire record to an audience of one person. That was the beginning of the idea. I wanted one other person in the booth with me, and I want to be talking to them, because that's how we're going to get something out of this performance that I've never got before on record. And then it went further. I said: 'Okay, I want them to be three different generations.' And everyone said, 'Let's make this happen.' So we did it. I did the album in full as a live 45-minute performance. First to a guy who's 78, then to a person of my age, or a few years younger than me, and then to a couple of young people. For the younger generation, it was a 12-year-old, a 14-year-old and a 16-year-old. So it's three of them together because I thought it was probably quite a lot for just one of them to take on their own. But yeah, that's what we did. And it was amazing.”

When you hear the record, can you recognise which of the audiences you're talking to?

“For the main part it’s the take I did to the person of my generation, who is a poet called Bridget Emmanuel, who is a friend of mine. Maybe because I knew her, and I was comfortable with her, and we had a cultural commonality because we're both from South London, we're both poets... I don't know what it was, maybe that we're friends, and that was the best take. Dan [Carey, producer and co-writer] came running in. He was on headphones in another control space and he came running into the live room and was like, 'I've never, ever heard you do it like that. This is it, this is the take! We've got it.’"

Have you got any plans for the takes with the other two audiences, just so we can hear the difference?

“Maybe on Record Store Day in the future, or something, we could put an alternative take out. I don't know how interesting it really would be for anyone other than me and Dan, but it is interesting to see what happens to the same words when spoken to people of different generations. I don't have any burning desire to release it, but it would be cool at some point. Let's see how this take goes down first and if there's an appetite for any more.”

“That's right. We'll call it Tastes Like The Feeling Of Pizza. It will be huge! [Laughs]"