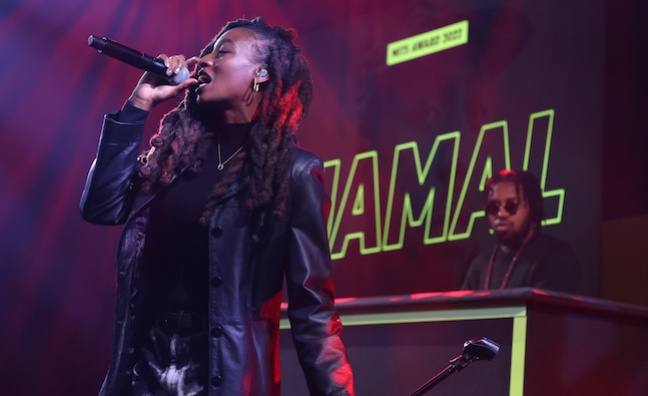 Jamal Edwards MBE has been honoured with this year’s prestigious Music Industry Trusts Award (MITS) in recognition of his outstanding contribution to the industry as a music entrepreneur, DJ and founder of SB.TV.

The gala was held in aid of the BRIT Trust, Nordoff Robbins and the Jamal Edwards Self Belief Trust, the charity set up by his family in 2022 to honour his memory and continue Jamal Edwards’ legacy. This is the first MITS Award to be given posthumously, with Jamal Edwards, who died aged 31, also being the youngest recipient of the award.

Accepting the award on behalf of her son, Brenda Edwards received a standing ovation.

“I want to say ‘thank you’ to Dan [Chalmers] and Toby [Leighton-Pope] and the MITS Committee for acknowledging Jamal with this prestigious award," she said. "It’s been a real honour to hear so much great talent in one room. I’m overwhelmed and Jamal would be blown away by tonight.”

Little Simz closed the night with a set of songs from her acclaimed album Sometimes I Might Be Introvert, which recently won the Mercury Prize.

“We’re gonna have a party in here and celebrate this man, everything he’s done and everything he’s accomplished,” said Little Simz. “He was a go-getter, someone that had a vision.”

Co-chair of the MITS Award committee, Toby Leighton-Pope, said: “It was an incredibly special room to be in tonight with the music industry coming together to honour Jamal Edwards. Thank you again to the Edwards family for accepting the MITS award on his behalf, and to Little Simz, Jorja Smith, Mahalia and Max Cyrus for their spectacular performances. We’re proud to continue to raise funds for the MITs charities The BRIT Trust and Nordoff Robbins, and to this year, donating funds for The Jamal Edwards Self Belief Trust.”

Co-chair of the MITS Award committee Dan Chalmers added: “We are very humbled to award this year's MITS to Jamal Edwards. He was a visionary, brilliantly creative and ahead of his time, making space for rising stars and talented artists, launching so many impressive careers. Thank you to his family for their involvement and to the amazing artists who helped make tonight so special. We hope both Jamal and SB.TV’s legacy can live on and help inspire future generations.”

Celebrating its 31st year this year, the Music Industry Trusts Award supports the BRIT Trust and Nordoff Robbins, and is sponsored by PPL, SJM Concerts, Spotify, Voly Music and YouTube.