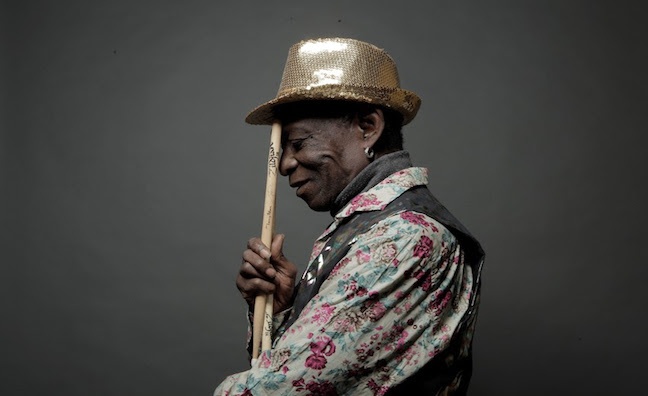 The music world has paid tribute to legendary Afrobeat star Tony Allen, who passed away in Paris yesterday afternoon (April 30) aged 79. The news was confirmed via an official press release – a cause of death was not stated.

Allen was the drummer of Fela Kuti's band Africa '70 for 26 years, and was commonly hailed as one of the founding fathers of Afrobeat and greatest drummers of all time.

In addition to his work with Kuti, Allen also collaborated with Damon Albarn, The Clash's Paul Simonon and the Verve’s Simon Tong for the group The Good, The Bad And The Queen, their most recent outing being 2018's Merrie Land. He was also a member of Rocket Juice & The Moon with Damon Albarn and Red Hot Chili Peppers bassist Flea.

In March this year, he released his latest album Rejoice – a collaboration with the late trumpeter Hugh Masekela – via World Circuit.

A host of top names have taken to social media to praise the late, great drummer – you can read the tributes below.

Incredibly sad to hear the news about #TonyAllen. I was fortunate enough to interview him several times - it was always a fantastic experience. Such an inordinately gifted musician who wore his talent with such élan. This is a piece we made in 2009 https://t.co/obmZM9zbnU

Tony Allen, the afrobeat pioneer and one of the greatest drummers ever, has passed away.

going to start the day with a tribute to the master Tony Allen who passed away yesterday in Paris. I spent many good times with him... he loved the DJ culture and was always keen to explore all musical avenues. Massive loss . Tune in at 9AM on @worldwidefm

The epic Tony Allen, the greatest drummer on earth has left us. What a wildman with a massive, kind and free heart and the deepest one-of-a-kind groove. Fela Kuti did not invent afrobeat, Fela and Tony birthed it… https://t.co/qXqMAP7QzT

So sad to report that an old friend from @africaexpress, one theeeee GOAT musicians the co-creator of Afrobeat just passed this evening, as Fela said... “Without Tony Allen, there would be no Afrobeat." ???????? #RIPTonyAllen pic.twitter.com/CQLDjXaoFc

Rest In Power to Tony Allen, The Godfather of Afrobeat Rhythms. Thank you for giving us the sound that would change our lives and our destiny as a people. pic.twitter.com/UXcoN3yF5k

R.I.P Tony Allen.
This man pioneered Afrobeat with Fela Kuti. His drumming was the backbone of the sound. Blessed to have played a show with him in Köln a couple year ago. A true genius. He will be missed. ???????????????? pic.twitter.com/x6WmYUJKk2

All hail! A true master... One of the most incredible drummers I’ve ever seen in my life and a remarkable man... #tonyallen #RIP #afrobeat #revolutionary #felakuti #afrika70 #thegoodthebadandthequeen… https://t.co/Ga1pq8gta1