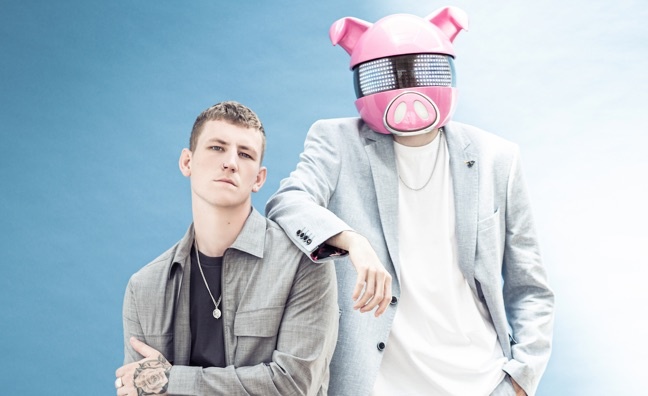 After mastering the tides of the chart with sea shanty Wellerman, Nathan Evans is diving back into pop's deep end with his second single Told You So.

Released today (June 24), and featuring a remix from Digital Farm Animals (pictured with Evans above), the track comes hot on the heels of Evans signing a publishing deal with Sony a few days ago. With 682,387 sales for Wellerman so far, according to the Official Charts Company, Wellerman continues to fly for Evans, who has also signed deals with Polydor and UTA this year.

The postman-turned-pop star tells Music Week all about how this week has been one of the most momentous of his life... Well after the week he uploaded that video to TikTok, of course.

You've gone from uploading a video to social media in January to a deal with Sony Music Publishing six months later. How does that feel?

"It's ridiculous. I think I've said this before, but I'm going to get the word 'ridiculous' tattooed on me somewhere for the amount of times I've had to say it in the last six months. It's what dreams are made of, but this is a dream that has actually come true for me."

Does publishing deal now give you firm foundations for your future?

"That's it exactly, it puts me in good stead. I know that overnight, this is not going to disappear. It's good."

What made you pick Sony Music Publishing?

"The fact that it's probably the biggest publishing company in the world! And it's Sony. When you grow up you hear all these people talking about different companies, and Sony is one of the biggest ones – and it always has been. When Sony got in touch it was an absolute no brainer for me."

Fittingly, there's a new track to go along with the deal...

It's not a sea shanty but it does have nautical references doesn't it?

"Funnily enough, it wasn't done on purpose. It just kind of fitted the song, but there are nautical themes that do tie in with Wellerman so it worked out absolutely perfectly."

Pop folk is the route I want to go down

When was it recorded?

"It was written about two months ago. What happened was, I went to the studio with three guys. Two brothers who are in a band called Saint Phnx – Stevie and Al Jukes – and another guy called Ross Hamilton who is a producer. I went in with nothing but came out with this song. When I heard the finished demo it was absolutely incredible. Everyone who heard it loved it."

You have also managed to get a remix from Digital Farm Animals, how did that happen?

"One of the guys in Saint Phnx knows Digital Farm Animals so he texted him and asked him to listen to this song we'd just come up with and he replied with a remix off his own back. It was amazing. I couldn't believe it, Digital Farm Animals is a big act, so for him to remix it without being asked is amazing."

The song marries a folky feel with a pop sound, is that the way you see your music going now?

"Yeah, that's it exactly. It's folky, poppy but also a bit dance as well with the remix. Pop folk is the route I want to go down, it's what I listen to and enjoy. So that's the route I see myself going down."

Not that you are done with sea shanties, aren't you releasing a book about them in October?

"Yes, it's a book full of different shanties, giving you a bit about what each sea shanty means, where it came from and how it was sung. I'm looking forward to that coming out. It's going to be cool."

Looking ahead, do you have plans for more new songs?

"I'm in the studio all the time at the moment, writing and making new songs. I'm trying to do that as much as possible. Then in December, I've got a UK and Ireland tour, and after that, we go to Europe in January. It's going to be super busy! I can't wait. It's going to be great to finally meet some of the people I've become friends with on TikTok, let alone perform in front of a live crowd."