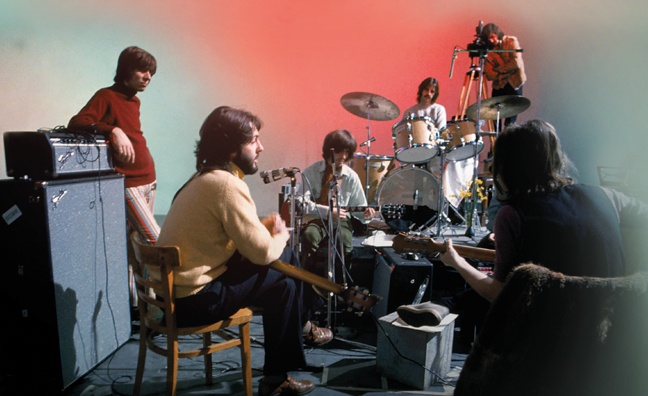 Beatles producer Giles Martin has discussed how streaming services have helped turn a whole new generation of fans onto the band's music.

The group, whose monthly Spotify listenership now exceeds 25 million, have become one of the most popular bands on DSPs since their belated streaming debut in December 2015.

Spotify statistics released for Abbey Road’s 50th anniversary in 2019 showed the leading demographic for streaming the band’s music to be 18-24, accounting for approximately a third of all Beatles streams.

“I remember being one of the people saying, ‘Listen, if we don’t go on streaming services, forget about how many box sets you can sell, there will be a whole generation that doesn’t know The Beatles exist,’” Martin told Music Week. “I think what happens is that people start talking about them and then they start listening. The story of The Beatles is so compelling, because it’s so unbelievable."

Martin, who is head of audio and sound at Universal Music Group, recently remixed the Fab Four's final studio LP, 1970's Let It Be, which was re-released in multiple formats via Apple Corps/Capitol/UMe on October 15 and is No.2 in the midweeks. The special edition includes the never before released 14-track Get Back stereo LP mix, compiled by engineer Glyn Johns in May 1969.

“Let It Be is an interesting project, but I didn’t really know that much about it before doing it,” explained Martin, speaking in last month's issue. “I didn’t realise it was only a period of three weeks, for instance; I thought it went on for much longer. I didn’t realise the chronology of it, where they went to Twickenham, then to Savile Row and then played the rooftop, and that was Let It Be.

"Then Glyn Johns mixed an album and they were like, ‘Oh... this isn’t really what we were looking for.’ Poor Glyn was like, ‘This is what you wanted!’ And they said, ‘Well, not quite. What we wanted was a live album; this is a collage of what we we’ve been doing.’ And so they scrapped it and went and made Abbey Road.”

Son of the late 'Fifth Beatle' Sir George Martin, Giles has previously worked on expanded 50th birthday editions of Sgt Pepper’s Lonely Hearts Club Band, The Beatles (White Album) and Abbey Road – released in 2017, 2018 and 2019, respectively – as well as the Grammy Award-winning Love album (2006) and Live At The Hollywood Bowl (2016).

With Let It Be marking the conclusion of the 50th anniversary reissues of the final four Beatles records, Martin stressed that updating the group’s earlier work is more complicated because of the technology utilised at the time, but did not rule it out entirely.

“I’d only do them if it was meaningful, as opposed to as a marketing tool,” he said. “But don’t get me wrong, we’re looking at ways in which we can do stuff that will be cool.”

Martin has also remixed the music for Peter Jackson's upcoming three-part, six-hour Disney+ documentary The Beatles: Get Back, which premieres over three days from November 25-27.