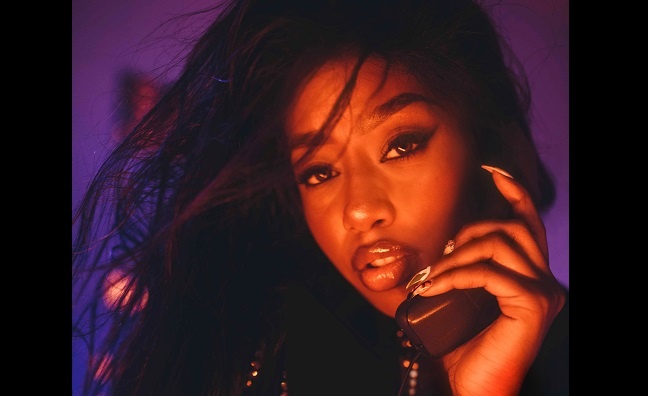 In the new edition of Music Week, we speak to the incredible Camille ‘Kamille’ Purcell – winner of the Music Creative honour at the Women In Music Awards 2019.

Back in May, Purcell graced the cover of Music Week’s annual songwriting issue to shed light on her life as an elite hitmaker, one whose anthems – which include certified bangers by Mabel, Little Mix, Jess Glynne and Clean Bandit – have notched up a staggering four billion combined streams around the world.

Kamille has penned three Top 10 singles this year alone: achieving her 10th UK platinum single in the form of Mabel’s Don’t Call Me Up (999,764 UK sales to date according to the Official Charts Company), as well as its follow-up Mad Love (483,008 – OCC).

While her success in the field of songwriting alone would have made her a worthy winner of the Music Creative honour, it is only one strand of her career. Purcell is also a recording artist who – recording as Kamille – recently released Don’t Answer, the first song from her upcoming debut EP which features a guest verse from Wiley.

On top of that, this year Purcell set up her own publishing company and record label, Pure Cut – to which she is, naturally, the first artist signing – and is also in the process of building her own studio in London.

Here, in an unread extract of our interview, Kamille talks more about her hopes for Pure Cut, what kind of artist the charts need and who inspires her…

How long have you been wanting to set up your own label?

“For years. I wanted this from the beginning because I understand what it takes to run an amazing company: it’s the people. I've really tried to surround myself with incredible people and teams who are going to help me do this the way I want to do. It's something I've always wanted to do, to create music with my own artists and my own producers. I’ve always dreamt of that, from being inspired by people like Jay-Z, P Diddy and Beyoncé. Seeing the empire Beyoncé's building now, it just cemented how I felt all along: that I want to be able to do that, and I want more for myself. I think that’s driven me. What I want to do is be a helpful hand for artists with whatever they need, I can't have this knowledge and experience and not give that to others and share that with people. That's really where I'm coming from.”

So what kind of artists are you looking for? What do the charts need right now?

“I think the charts need more experimentation, more innovation – that crazy stuff that you're hearing on Spotify and Apple Music and all these amazing platforms that just comes out of nowhere and gets into the charts. That excites me – the stuff you're not expecting to hear on the radio. That’s where I want to place myself in the industry. I want to see more of that.”

You spent a lot of time on X Factor as a vocal coach and mentor. What did you learn about A&R from that?

“That was such an incredible time, because essentially you’re A&Ring people in eight weeks from a complete unknown person to someone who has 500,000 followers on Twitter. It’s like speed A&Ring – you help someone over a couple of months and it taught me so much. Finding these amazing versions of songs with Simon Cowell every week, finding the right theme for them to do and continually raising the bar with them every week… That was such an amazing thing for me to learn, and it was also seeing what reacts really well on TV and radio. It was such a good time for me to learn. I remember the first year I did it, I came straight out of that and wrote Black Magic because I feel like I knew instantly what Little Mix needed at that time.”

How big a part of the Kamille master plan is having your own studio?

“For me, it’s a massive piece. When I look at the people who inspire me, you always see them in their own studio space. I wanted somewhere where my artists could come and write and create. I’m going to be based there and have an amazing set of engineers and producers that I love working with. For my team, the artists and producers I take on, they’ll be able to come in whenever. It’s going to be a family vibe – not an operation. More like, ‘Let’s go and write something!’”

Finally, you’ve been named given the Music Creative honour at the Women In Music Awards 2019 – but who would you give that title to?

“I’d probably say, Rebekah B Creative – she directed my video for Don’t Answer. She works with so many rappers, so many amazing people, but I’ve never seen a woman single-handedly take over a room with such poise and dignity and she is so amazing at getting her ideas over and she’s so calm. It was my favourite video experience ever and I’m doing another one with her. I love her so much. She inspires me to be a strong female in this industry and to really get your ideas across and be so powerful yet never come across as a diva in any way. And there’s not that many female directors.”