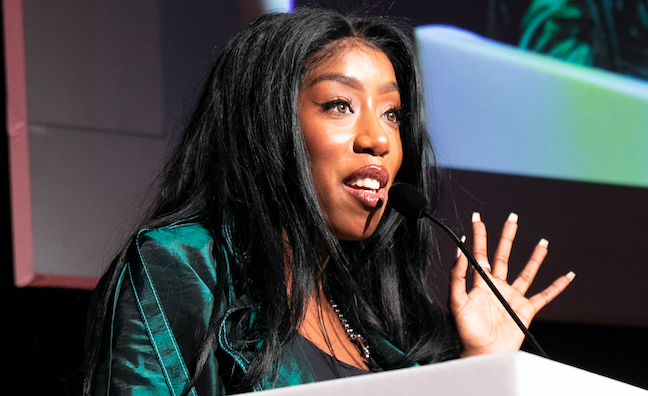 As the dust settles on the biggest and best ever edition of the Music Week Women In Music Awards, we’re taking you behind the scenes of an event that celebrated the achievements of an array of music biz stars including Emily Eavis, Tiffany Calver and Annie Mac.

Camille ‘Kamille’ Purcell won the Music Creative award, which honours “significant contribution to the making of music behind the scenes, through songwriting, studio production, or studio technology”. This was the category's second year at the Awards, and Purcell follows 2018 winner Jin Jin.

As the writer behind a vast quantity of bangers for the likes of Little Mix, Jess Glynne, Jax Jones and more, Purcell is one of the most sought-after hitmakers in the business.

Pick up the new edition of Music Week to read an interview with Purcell, and scroll down to read the former cover star’s acceptance speech in full…

kammy won an award for bein a Creative Woman In Music last nite my boos! thank u sm @MusicWeek & @PRSforMusic for supportin me so much ?????? pic.twitter.com/0q7ewxyW8M

“That video! Who did that? I want it [to watch] at home, it’s ridiculous! I don’t know what to say. I had a speech but then I went and lost my phone and it’s now been disabled! I won’t take long I promise.

“Firstly, every woman in this room give yourselves a round of applause! I was on a train the other day with Martin [Evans], my manager, we were going to Sheffield from Kings Cross and the whole train was evacuated, the station too. I knew something was up; they tried to say it was a fire alarm and I wasn’t having it. Anyway, my brother works in special ops, he actually does, and if there’s a terrorist attack he gets called out. I told him and he said there was a bomb scare and it just made me really appreciate my life and life itself. It made me go, ‘I’m not doing enough with my life’. I don’t think any of us are realising our potential. There’s so much we could do. As women, we could be braver, we could speak out more, we could treat ourselves more.

“Working nine to five and not getting to a spa, this is what we need to do. I’m being real, it’s too much. I’m here writing songs about being about a bad bitch, but I’m not being a bad bitch! [Laughs] When girls come to the studio and they’ve had a terrible ex break their heart I get so angry. It gives me joy to write these break up songs that turn into money for them! I’m just so grateful.

“I want to talk about going out there and doing what you can. I don’t care if I’m going to fail, that’s one thing I’ve realised this year. I’m just going to be brave now. I might fail, but I just don’t care because I’m going to learn something from that, that’s why I decided to step out on my own and do my own label and find more talent and give them things I’ve learned.

I might fail, but I just don’t care because I’m going to learn something from that

“I want to thank my incredible team at BMG, all the women on the table here today, just give them a round of applause! My publisher is incredible and we’ve had so many No.1s together. I want to thank everyone.

“I also really want to thank Dan and Fay, who I saw today after not seeing you for so long, you two are incredible. I want to thank you for helping me through the process of existence, I’m so grateful to you.

“I want to thank Jackie Davidson. I’ve never been more inspired to be a black woman in this industry. I’ve never known anyone like you, I’ve never seen anyone work as hard as you, you’re fearless, an inspiration to all of us here. I hate even using the black thing, my parents taught me to go for it whatever race you are. But at times like this I remember, ‘Oh yeah, I am black and there’s not many of us’ you know? I’m really proud of that.

“To all my women in here, keep thriving, keep surviving, don’t call your ex back and move on with your life! Thank you so much.”