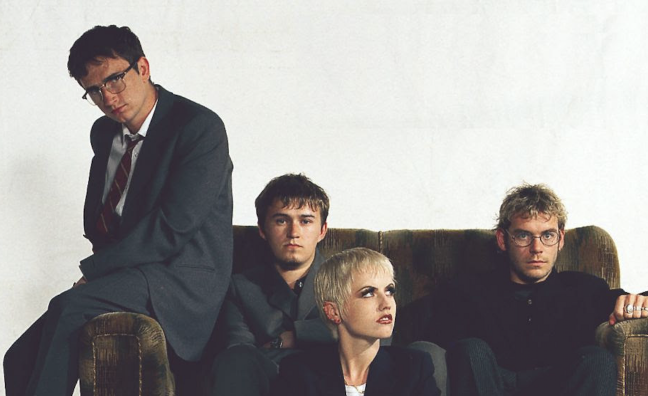 UME/UMC/Island Records are today (April 20) celebrating The Cranberries reaching the 1 billion YouTube views milestone with their Zombie video. The group – who now join a relatively small fraternity of artists to reach the coveted number – are the first Irish band to cross the 1bn threshold.

Zombie appeared on The Cranberries 1994 album No Need To Argue and has since been sampled by Eminem and covered by Bad Wolves. It has sold 778,942 copies to date according to Official Charts Company data, and been stream over 427 million times on Spotify alone.

Cranberries singer Dolores O'Riordan died, aged 46, in January 2018. An official press release stated that an expanded reissue of the record is planned for release by UME/UMC/Island later this year.

Speaking of the 1bn achievement, Fergal Lawler, The Cranberries drummer said: “We are so delighted with the news that Zombie has reached 1 billion views on YouTube.  We are sure Dolores has a big, proud smile on her face too.  Thank you so much to all our fans around the world for supporting us over so many years. Hopefully you are all safe and well and managing to find some hope and positivity in our music."

Noel Hogan, The Cranberries guitarist added: “For Zombie to reach 1 billion views has been a long road and another milestone for the band. Little did we think twenty something years ago that this song would stand the test of time and mean so much too so many. All we can say is thank you to the fans for all they have done for us”.

Bassist Mike Hogan concluded: “I can still remember making such a great video and seeing the impact that it had - and still does - on people. Big shout out to all The Cranberries fans around the world - thanks so much.”

You can watch the Zombie video below

Earlier in January, Primary Wave acquired a majority stake in the music publishing catalogue of Noel Hogan, co-songwriter and lead guitarist for The Cranberries.