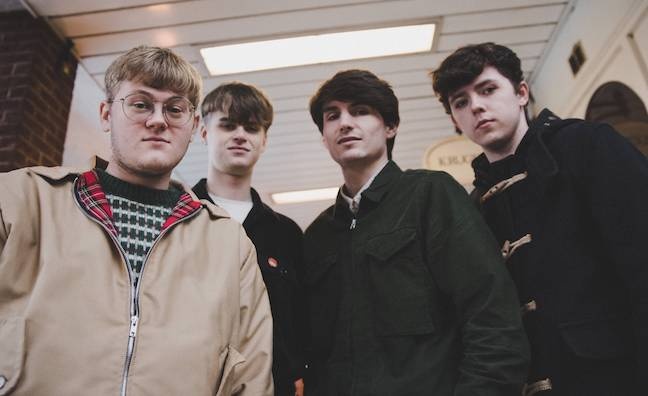 Wigan-born band The Lathums have enjoyed a better 2020 than most.

While their support slots on tour with Blossoms and Paul Weller have been postponed, the 20-year-olds have released their first single All My Life with Island and scored their first ever Top 20 hit in the album charts with The Memories We Make.

The album – not to be mistaken as their debut record – is a collation of their first two EPs, and shot to No.14 this month after their devoted fans flocked to snap up a copy on vinyl. “People are just so dedicated to the music and the band,” said lead singer and guitarist Alex Moore, speaking to Music Week for a recent On The Radar interview. “Whenever we release or do anything we’ve always got loads of support from everybody and that makes a massive difference.”

Combining their first two EPs was a move made because “there was still life left to breathe in them”, and it's paid dividends. Now The Lathums are set up nicely as they begin preparations for their debut album and have already affirmed on Instagram that it “will get #1 of course.”

Music Week spoke to Moore at Parr Street Studios in Liverpool, where he’s working on the album with producers Chris Taylor and James Skelly (The Coral). Skelly has also produced the band's latest single, so could All My Life be a taster for the new record?

“All My Life was the first song that I wrote so I was quite young, and there’s an innocence to it because I wasn’t very practised in the instrument or anything,” Moore said. “Now we’ve been rehearsing and playing a lot, so it’s that same innocence, the same new fresh face kind of vibe but with a really refined touch to what’s to come.”

I've not lived very long so far, but I have lots of things to talk about

That refined touch in their songwriting is something Moore accredits to his personal life. But it’s the relatability in his lyrics which is growing their fanbase by the thousands, though Moore might think differently. “It’s a little bit because I’m a bit weird,” he said. “I’ve had lots of eye-opening experiences throughout my life, I’ve not lived very long so far but I have lots of things to talk about.”

And with the horrific events of this year on his mind, Moore is feeling inspired to bring some positivity to their fans. “We’re all just one people, there’s so much division and hatred but there doesn’t need to be,” Moore said. “I don’t see like to see myself as a political person, but [the album] will probably ruffle a few feathers.”

You might be wondering how Moore is handling writing his debut record off the back of their recent success, but he assures its just “business as usual” for The Lathums. But, he added, “we've got some really good songs on the go if I do say so myself!”

* To read our recent On The Radar with The Lathums, click here. To make sure you can access Music Week wherever you are, sign up to our digital issue by clicking here.