"There's no reason they can't be one of the biggest bands in the world": Concord on the rise of Ghost 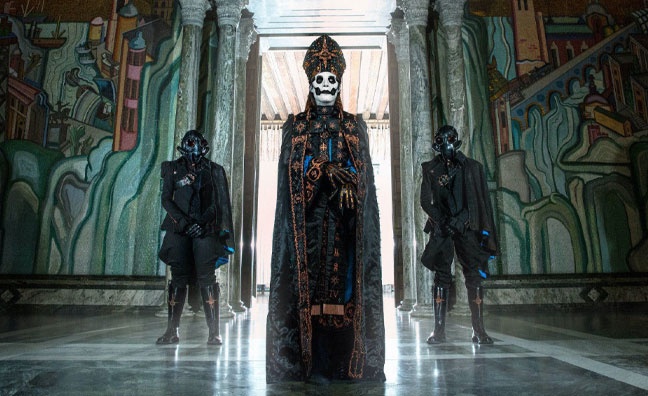 Last month, enigmatic Swedish rock group Ghost made a huge impact in charts around the world. Impera, released on Loma Vista Recordings, part of the Concord Recorded Music family of labels, entered the UK charts in a career-best No.2 position, selling 14,021 in its opening week – its nine vinyl editions attracting 4,785 sales according to Official Charts Company data.

It was the latest highlight in a remarkable journey for the mysterious band, one who’ve come a long way since their 2010 debut Opus Eponymous failed to even chart in the UK. Perhaps nothing illustrates this more than their latest tour: this week the group begin a UK arena run, which includes a colossal show headlining London’s The O2.

Ghost's success also marks another addition to Concord's successful spate of recent frontline releases including Tears For Fears, Yola and Nubya Garcia. Here, Fred Gillham, MD of UK & Europe, and Clare Maxwell, and senior director of marketing, at Concord Recorded Music talk us through a campaign that has well and truly taken the band to the next level…

Did Impera’s success exceed your expectations?
Fred Gillham: “It’s been such an exciting campaign to be a part of. The Week 1 volume was the top end of what we were hoping to achieve, but we always had really high ambitions for it. Every record, tour cycle and episode in the Ghost saga has reached a new scale of audience and Impera feels like a moment where we have tipped the balance from a large scale of ‘in the know’ fans to hitting a broader audience.”

So there is a sense in which fans outside of the rock/metal community have come on board this time around?
FG: “Definitively, Tobias Forge’s genius in the storylines and his craft in songwriting pull in a much broader audience than a metal or rock act. The sky's the limit here, there is no reason Ghost can’t be one of the biggest bands in the world for years to come. We have seen it before with artists from different genres who have created something people just want to be a part of which transcends genre. From day one of his conception of Ghost, the credit first and foremost goes to the genius and vision of Tobias. His creation has built a community for Ghost fans. It’s a relationship built and established over years which is a dream for a marketing and sales campaign. All the creative is built from the artist’s vision, it’s authentic and it caters to the fans first, but also is widely accessible to anyone new to Ghost.”

Did you try anything different this time around to broaden that audience, too?
Clare Maxwell: “Going into the campaign we had a strong idea of who Ghost fans were and where to find them, but equally, we knew where we needed to target to grow and expand beyond our already large fan base. There was still an element of education to be done within our set up with retail, media, radio and DSPs in explaining the story of Ghost and connecting the dots for people between the image, the music and the fandom. But we know from experience that once someone steps into, and understands, the world of Ghost, they stay there.”

This was a truly global success, Ghost's chart results show it...

Impera sold incredibly well on vinyl. How did you set up that side of the campaign?
CM: “When it came to our physical music output, we ensured our product offering was super-desirable, and in multi-formats, which was certain to cater towards an avid collector but also your more casual fan. It was really important that our creative was inclusive but equally had exclusive elements for the die-hard Ghost fan. D2C was obviously massive, but this time we also went far and wide with retail looking for an exclusive offering with every partner from Amazon and HMV through to specific indies and also E-Comm platforms like Rock Sound and Sound Of Vinyl. Essentially, [we were] offering as many retail partners as possible the same chance to attract the Ghost fans but also ensuring their marketing push to reach their wider audiences and new fans. That hook to new audiences is key, creating the image they have been missing out on this thing that is already so big.”

And what approach did you take with the marketing?
CM: “We wanted to make sure our campaign matched our ambitions. We launched the album with projections across major London landmarks, including St Pauls Cathedral. Once the campaign kicked off we ensured that there wasn’t a week where there wasn’t a Ghost activation or media output. We worked closely with Live Nation, who promoted the band’s UK arena tour, on collaborative advertising ensuring we amplified, again, the scale of the band and our collective ambitions for Ghost across record and live sales. Our marketing included a national billboard campaign, targeted guerrilla paste ups, national postering and we also partnered with brands and media on album events that were mirrored globally. Our press and radio output equally catered to the core audience with covers across Kerrang! and Metal Hammer and support across the Radio 1 Rock Show, Kerrang! Radio and Planet Rock, which cemented Ghost’s stature within the genre, but equally we broke out with wider features in broadsheets, NME, Metro plus first plays and interviews with BBC Radio 2 and 6Music. There wasn’t one thing that was the key driver here, it was multiple curated touch points, specific partnerships and a holistic vision that pieced together to create a rounded and expansive campaign.”

How do Ghost fare on streaming? What are the challenges and opportunities there?
FG: “Streaming is really promising, in the UK our Week 1 streams were over 1,600 equivalent albums on the chart, which is double what the last record did Week 1 and about 60% of the number Rex Orange County did the same week. This isn’t a case of an artist reliant solely on physical, it shows Ghost can play in both formats and the streaming base will continue to grow as we are seeing consumption in the genre increase for artists that appeal to a broad aged fanbase. The biggest challenge is being able to compete with more mainstream repertoire from an editorial or algorithmic point of view. I think rock as a genre tends to live in its own ecosystem on the streaming platforms so breaking out of that can be a challenge, but Ghost’s music appeals to a broad audience and can be programmed wider and we have begun to see that on this campaign.”

Ghost's headline show at The O2 will be a massive moment

Outside of the UK and US, what does the global profile look like for them?
FG: “This was a truly global success, the chart results show this…  Germany (No.1) Sweden (No.1), Finland (No.1), Spain (No.1), US (No.2), UK (No.2), Netherlands (No.2), Belgium (No.2), Canada (No.3), Australia (No.3) France (No.5), and Ireland (No.5). This is by design too, we pride ourselves on our single global plan approach to all our campaigns. We think about all major territories from the outset and have the ability to control the budget and plans in all those markets from the centre and execute locally via our teams and our distribution partnership with UMG and, in this case, Spinefarm internationally. It means we don’t need to rely on any other labels to buy into our campaigns, which can be such a frustration, and as such our artists and labels enjoy the control that gives. It’s what we believe sets us apart in the industry.”

And how do you plan on capitalising on the success around the UK tour? Playing The O2 seems like it will be a big moment…
CM: “It will be a massive moment, and as mentioned, we have been working with Live Nation closely as a partner throughout this entire campaign. Shouting about not only a chart topping album but also a sold out arena tour will get people, who may not already be paying attention, to definitely stand up [and take note]. We will be continuing our marketing, retail, streaming and advertising drivers around the live dates, and of course the press and radio campaign continues, but what is going to be really key for us is getting people to the shows to witness first-hand the world that is Ghost. We have won over a lot of media fans, but there is still a long way to go. There is a big demand from a broad array of media and partners to come to these shows, a lot of whom will be seeing Ghost for the first time, which is proof that the intrigue element of the campaign had worked, as such it’s going to be a pivotal moment in our next steps in the growth of Ghost beyond the success we’ve already seen, as we know these people will walk away having seen an amazing show with a deeper understanding of Ghost. It’s a true ‘You have to see it to believe it!’ sort of thing.”

Finally, both as a studio act and a live band, where do they stand in the wider rock firmament right now?
FG: “Right up there as one of the best and most exciting acts to be scaling the genre. They are hot on the heels of the well-established festival headline set and will no doubt begin to take that mantle in short order.”

You can revisit our recent interview with Concord's EVP of worldwide A&R Kim Frankiewicz here.