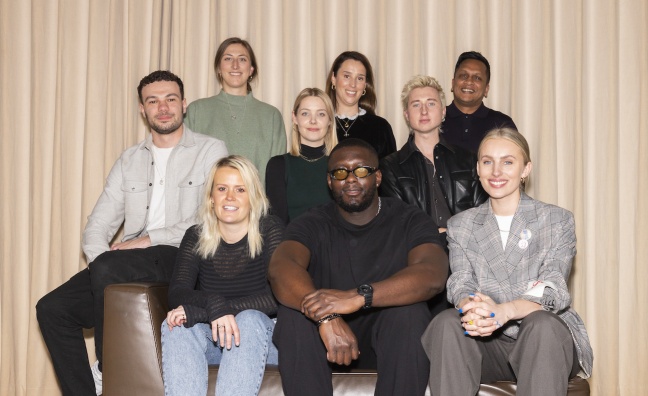 Warner Music UK has three of the biggest acts in the world right now: Dua Lipa, Ed Sheeran and Coldplay.

In the latest issue of Music Week, Victor Aroldoss, SVP, international marketing, joins his team to discuss their global superstars and the streaming impact of new acts including PinkPantheress, Joel Corry and Griff.

One area of particular focus is the burgeoning British rap scene and its increasing global potential. Tion Wayne may have had the first UK drill No.1 (alongside Russ Millions), but the real prize for the Atlantic-signed rapper is the huge export market.

Wayne amassed a whopping two billion streams globally in 2021, with 74% of that total outside the UK. As well as being No.1 in the UK, Australia, New Zealand and Ireland, Body reached the Top 10 in Denmark, the Netherlands, Norway, Sweden, Switzerland, Greece, Austria, Hungary and the Czech Republic.

After the UK, Tion Wayne’s biggest streaming markets last year were the US, Italy, Australia and Germany.

“We had the first Australian No.1 for a UK rap track ever for Body,” Victor Aroldoss told Music Week. “There are huge opportunities [for UK rap]. We’ve proved that with Tion Wayne, who also had a gold record in America [Body is approaching 500,000 US sales]. There’s a whole level of artists we want to have international careers. I want them to be playing big venues all around the world, as they are doing in the UK.”

The global push for Tion Wayne was previously led by Portia Clarke, who moved to head of marketing at Motown last year.

Aroldoss is targeting further global success for Wayne, as well as UK rap artists Pa Salieu and Darkoo. Greg Ojo has been appointed as genre lead to focus on Black British music.

“I want to break the perception that the only viable export for Black British music is the USA,” said Ojo, who was previously at Disturbing London. “Artists such as Tion Wayne, Pa Salieu and Darkoo have shown that there are a host of territories, as well as the US, that are very receptive to not only Black British music, but also the culture that comes with it.

“Our work with developing markets, and developing artists from across the Warner Music UK roster, is a testament to the ambition that Victor and the international team share to grow our Black music exports at all levels.”

“That's why that role was brought in - we need to develop a global Black music UK superstar,” said Aroldoss.

We need to develop a global Black music UK superstar

“One of the most important things that we need to do is that we need to show international success for our Black music artists, and really ensure that our markets are prioritising and being as aggressive as they would for any other genre of artists,” he added. “That is a bespoke approach. One of the things I've actioned - with Greg - is to ensure that he's talking to domestic hip-hop and rap and Black music specialists and product managers in local teams.

“I don't want the international product manager [in a territory] working on [British] Black music artists. I want the person who’s working their biggest hip-hop artists in Sweden or in Spain, for example, so that we're talking to local cultures. Greg's role is hugely important in ensuring that, yes, we're exporting UK stories and success, but we're also developing our own authentic story in that local market, [with acts] being marketed to the local rap and hip-hop scene.”

Tion Wayne and Darkoo have teamed with local artists in other territories, but Aroldoss stressed that there are options beyond guest features.

“It could be collaboration in terms of jumping on a track, but it can also be interacting on socials, just expanding your network,” he said. “Greg’s role is about showing commercial success, but also exporting cultures and integrating cultures. So it's very important.”

“The streaming happening in Africa with Darkoo shows success can happen everywhere,” said Aroldoss. “That’s great, but as a repertoire owner we need to be really receptive to providing data [to global markets].

“Ashnikko, for example, really popped in the States first and we could see that happening. It was then really important we were feeding that central global story from London.”

“The three at the top of my mind at the moment are absolutely Tion Wayne, Darkoo and Pa Salieu,” said Aroldoss. “We’re deadly serious about breaking Black music abroad.”

Subscribers can click here to read the interview in the latest issue.

Read our interview with Tion Wayne and the Atlantic team here.