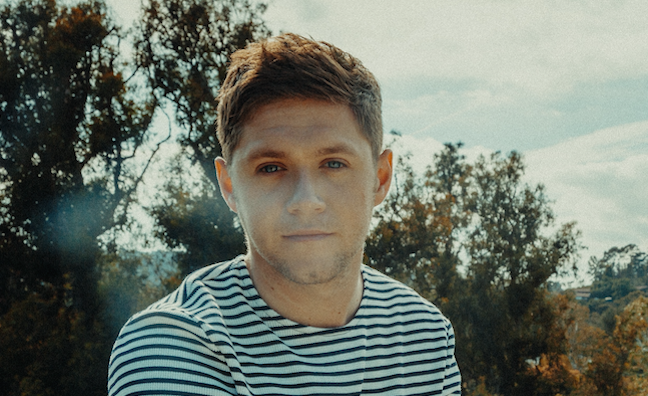 Niall Horan impressed many with his solo singles This Town, Slow Hands and Too Much To Ask, and reaps the rewards with his debut solo album, Flicker, making an impressive first showing.

The third original member of One Direction to release a solo album - following Zayn Malik and Harry Styles - the 24-year-old from Mullingar breezes to pole position in his native Ireland and The Netherlands, while debuting at No.2 in Italy, No.3 in Argentina, New Zealand and The UK, No.5 in Sweden and Flanders, No.8 in Germany and No.15 in Wallonia. The album is also almost certain to open atop the US charts, and will score a raft of further debuts a week hence.

Meantime, Pink's seventh album, Beautiful Trauma, debuts at No.1 in Australia, Austria, Canada, The Czech Republic, Slovakia, Switzerland and The USA, at No.2 in France and Norway, No.4 in Finland and Spain, No.5 in Denmark and Portugal and No.6 in Poland. It falls in eight of the territories in which it debuted last week, relinquishing the No.1 position in Flanders. Ireland, The Netherlands and the UK, but staying at No.1 in New Zealand, and climbing 32-28 in Japan.

Ten months after his untimely demise at the age of 52, and 27 years after it first topped the chart, George Michael's second solo album, Listen Without Prejudice Volume 1, returns to No.1 in The UK, fuelled by the screening of the Channel 4 documentary, George Michael: Freedom plus its return to availability on vinyl and the release of expanded editions. Also resuming its chart career at No.3 in Ireland, No.5 in New Zealand, No.6 in The Netherlands and Italy, No.9 in Flanders and Germany, No.15 in Wallonia and No.35 in Japan, the album would have fared better but for the fact that reissues, even expanded ones, are denied chart placings in some territories.  Expanded repackaged albums from The Smiths (The Queen Is Dead) and The Pet Shop Boys (Yes and Elysium) fare much less well on their returns.

Opening at No.23 in The UK last week, The Ooz by King Krule - eclectic 23-year-old Londoner Archy Marshall - enjoys more overseas success than his previous two albums combined, debuting at No.51 in Australia, No.58 in Switzerland, No.60 in Ireland, No.63 in Flanders, No.81 in Wallonia, No.114 in The USA and No.124 in France.

Dua Lipa's eponymous debut album has received multiple mentions in this column since its release 21 weeks ago, and merits further coverage this week. With the singles New Rules continuing to grow, the album achieves new peaks in Denmark (19-14), The USA (75-63) and France (172-127), while debuting at No.17 in Croatia and resuming upwards momentum in Finland (23-20), Italy (67-41) and Slovakia (95-90). It is a bit of a mystery why the album isn't charting in Germany - New Rules has been in the Top 20 there for nine weeks and holds at No.12 in the latest chart but the album, which debuted and peaked at No.22, has been absent from the Top 100 since June.