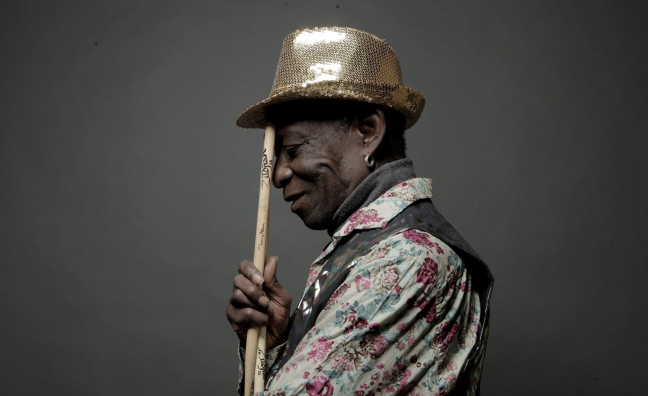 Tony Allen is to be honoured at the AIM Awards 2020, as the event announces plans to take place virtually a month earlier than planned.

UK rapper Digga D and jazz drummer Moses Boyd lead the way with three nominations each for this year’s ceremony, which will take place digitally on August 12.

Transgressive-signed singer Arlo Parks is the first performer to be revealed for the event, which received the highest number of nominations in its history. Johnny Marr was among the performers last year.

Afrobeat pioneer Tony Allen, who passed away in April, has been revealed as the winner of the Outstanding Contribution To Music award. His We’ve Landed collaboration with Hugh Masekela is also up for Best Track.

The public vote for the Best Live Act award is open now. This year’s shortlist includes 54 independent artists and voting closes on June 29.

Attendees of the virtual event will be able to purchase VIP hampers and AIM Awards “Pub In A Box” from the end of June via Signature Brew.

This year’s charity partner will be the Roundhouse, where last year’s show took place.

AIM CEO Paul Pacifico said: “As the ceremony evolves into a virtual event, it’s wonderful to see that this year’s list of nominees is also firmly on the cultural cutting edge. This is an eclectic and talented group of artists that truly represents the breadth, depth and diversity of independent music which these awards exist to celebrate. With our new virtual format opening the door to an exciting range of possibilities, we can’t wait to reveal what we have in store for August, and see where this year takes us.”

The judges and nominees for the AIM Awards 2020 are listed below.

Sorry – Right Round The Clock

Everything Is Recorded – Friday Forever

Laura Marling – Song For Our Daughter

Life – A Picture Of Good Health

One To Watch In Association With BBC Music Introducing

Bombay Bicycle Club – Eat, Sleep, Wake (Nothing But You)

Outstanding Contribution To Music In Association With Merlin