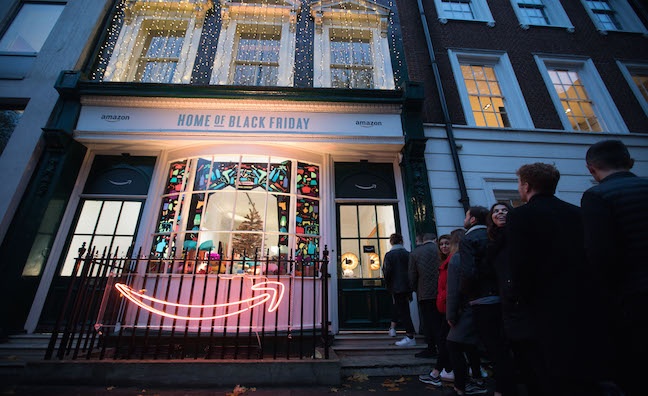 Amazon is offering music fans deals across streaming, physical and tickets this Black Friday. The company has also opened a pop-up shop in London’s West End.

Paul Firth, head of Amazon Music UK has told Music Week the company offers customers “access to music in whatever way suits them, whether that be streaming, digital download or physical formats”.

Highlighting the options of offer for the pre-Christmas Black Friday event – which the wider music industry has notably lesser involvement in than in previous years – he said: “Streamers will love to take advantage of our three months of Amazon Music Unlimited for 99p offer, and great deals on Amazon Echo and other Alexa-enabled devices.

“Customers on the lookout for CD and vinyl deals will find classical music box sets, Now That’s What I Call Music albums and new releases from artists including Niall Horan, Shania Twain and Tom Chaplin.”

Rival Spotify has matched the 99p deal – put in place to celebrate the 1st anniversary of the Amazon Music Unlimited service – but Amazon is beefing up its Black Friday package, offering customers an in-store experience in its pop-up shop, called ‘Home Of Black Friday’.

There are also money-saving deals across the company’s voice activated speakers offering, Echo, Echo Plus, Echo Dot and Echo Show.

The shop is designed to showcase the best of its Black Friday sale, which runs until November 26. Located at 13 Soho Square and open 12:30-7:30pm, it offers visitors the chance to explore over 100 curated Black Friday deal items, play games to win great prizes and take part in workshops.

Universal Music UK has also signed up to Black Friday with its online Great Offer Store, though the bargain basement prices are few and far between. Cheryl Cole's albums are being sold off for £1.99 each on CD, while James Bay's debut and Brandon Flowers' The Desired Effect are going for £4.99. Amy Winehouse's Back To Black is £6.

Universal has also discounted merch with t-shirts reduced by 20% and big price cuts on Beats by Dre headphones.

In the live sector, Academy Music Group is promising 50% discounts on some gig tickets from 9am. Ticketmaster has a flash sale with two-for-one offers and discounts on tours from A-ha (£5 off), Kim Wilder (25% off) and Status Quo (50% off).