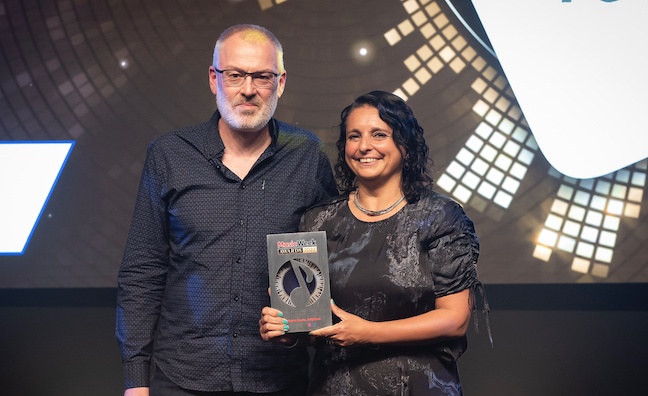 Resident Music co-founders Natasha Youngs and Derry Watkins have spoken to Music Week about the vital role that record shops play in the music industry.

At this year’s  Music Week Awards, Resident Music triumphed in the independent retailer category and were the first winners on stage at the event. A visibly emotional Youngs spoke backstage of how much the recognition resonates.

“No one opens a record shop to get rich or to make money…” said Watkins.

“Or to have a day off!” Youngs added.

Watkins said it takes a special type of person to run a record shop, and the husband and wife team paid tribute to their fellow nominees.

“You hope to get by,” he continued. “This is something you can only do if you love music to a point beyond what is sensible, I guess. It means so much to people, whether that’s the bands and labels who want us to stock their records, or the people who buy them. It’s just so important to people that it feels like you have to give your utmost otherwise you’re letting people down.”

This is not just a business, it’s our livelihood

Resident last won at the Music Week Awards in 2019, regaining the title this year from Banquet Records in Kingston. Resident also came out on top in 2011.

“It feels a strange thing to say when we sell more records to more people now than we ever have, but it just feels like it’s getting tougher all the time,” said Watkins. “There is so much more that goes into selling a record to someone now at every single level, more than ever before.”

Youngs emphasised that the Brighton-based store is relishing the task.

Derry & Nat just picked up this incredible honour on behalf of the whole Resident team.

A very unexpected win, accompanied by a bumbling, emotional speech!

“It’s really exciting, because there’s so much innovation around everything now, every album campaign feels like it comes with another layer of complexity,” she said. “It’s a lot for us to keep on top of, but people are constantly trying to think of new ways to engage customers with physical product, new ways to reach new people. It’s really nice to be included as part of that.”

The husband and wife pair said that record shops and the independent sector are vital for the rest of the business.

“Tonight shows how much it all matters,” he said. “We’ve met people in all areas of the music industry, some that we didn't even know existed before now. Every single one of those things makes a difference.”

“We don’t see it as a hierarchical thing at all, every little bit plugs in together into the bigger picture,” Youngs said. “Indie retailers and grassroots venues are just as important as the A&Rs and everybody else, it is all part of one great ecosystem.”