"Formats can all co-exist if we don't deliberately sideline them": Resident Music's Natasha Youngs talks the future of the CD 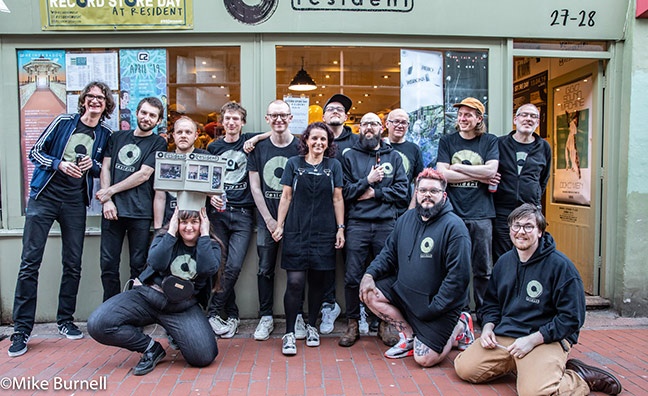 In the new edition of Music Week, we head to the seaside to visit the winners of the Independent Music Retailer at the Music Week Awards 2019: Resident Music.

Founded by Natasha Youngs and Derry Watkins 15 years ago, the store has moved from its initial days selling only CDs to becoming one of the most important record stores in the UK. While Youngs says the Resident team are honoured to be winners, they don’t view the other stores in their category – including previous 2018 winners Banquet Records – as competition.

“I have massive admiration for so many of our fellow indies,” Youngs told Music Week. “Making a record shop work, keeping it relevant, and keeping it fresh is a lot of work, and there are a lot of shops out there impressing us with what they are achieving. So, it feels like an even bigger honour that we stood out against that level of ‘competition’. I actually feel a bit uncomfortable with that word, to be honest. Other indies are, in cold financial terms, ‘competition’, but I honestly think we are all benefiting from seeing each other more as allies. I don’t see us so much as separated from the ‘competition’ as working in parallel in order to keep the indie retail sector strong.”

In the feature, Youngs addresses the host of events and initiatives Resident is now home to, from its own The Resident Annual, an end-of-year 100+ page book including their albums of the year to instores with Slowthai, Kate Tempest and Low and outstore events at Komedia such as Idles’ album launch show. Youngs explained that having a live offering has been a crucial way for independent record stores to distinguish themselves not only from other retail stores, but also from the typical gigs people will go to.

“A while ago we took on someone to help us specifically look after in-stores so that we could offer more of them and cope with all the work that goes into putting the events on,” explained Youngs. “We bought a small PA and a very modest stage. It’s all still very homely and intimate in the shop, and that’s how we think it should be. We are not trying to be a venue. The show that fans get at in-stores should be different: they should be getting something more real, more urgent, more ramshackle, even. It makes the events really special.”

We seem determined as an industry to constantly reinvent and move on, even when we don’t need to

In the feature, Youngs also addresses the current state of the vinyl revival. Recently, Music Week research suggested that the vinyl revival was showing signs of having topped out (Q2 sales were actually down 1.1% year-on-year, despite Record Store Day falling in the quarter). Youngs remains both optimistic and realistic.

“I don’t honestly think we have reached peak vinyl yet,” she tells Music Week. “What we do seem to have reached, however, is peak pressing plant capacity and peak confidence from labels. What we are seeing consistently from a shop perspective is records going out of stock quickly, sometimes on pre-order before they have even hit the shelves, and then not being available for weeks, sometimes months afterwards. The lead times on vinyl pressing mean that it’s really hard for a label to react to demand quickly if an album suddenly flies or picks up great press or radio play. We are missing loads of sales opportunities for vinyl due to lack of availability. This goes across new releases and reissues. As a result, we currently don’t know what the true demand for the format is out there because it’s impossible to track lost sales.”

As to whether she sees an end in sight for the humble CD – the format that first helped Resident open its doors?

“Demand has dropped,” Youngs told Music Week. “Inevitably. There is still a lot of love out there for that format. However, the industry and external forces have quickened its demise. New cars don’t have CD players, laptops/PCs don’t have disc drives any more and many artists/labels are not seeing the demand for CDs and don’t see them as relevant: they’re not sexy, they're an old story. We seem determined as an industry to constantly reinvent and move on, even when we don’t need to. It’s a real shame. The formats can all co-exist if we don’t deliberately sideline them.”