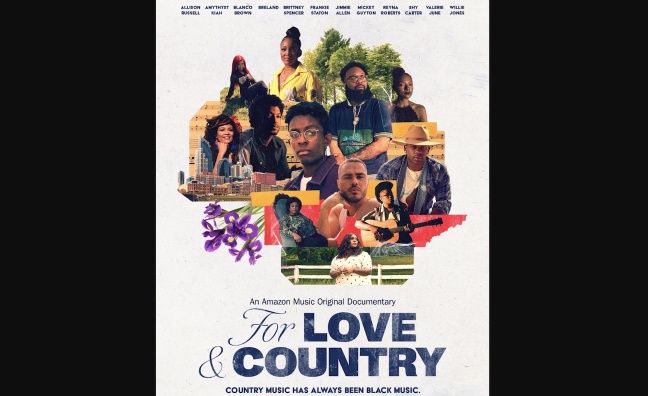 Country music is becoming more diverse, with radio and industry executives recently speaking to Music Week about the new voices in the genre.

The Country To Country festival at the weekend featured a more diverse line-up than previous years.

Now Amazon Music is readying the launch of a new documentary that shows the key role of Black musicians in the roots of country.

Directed by director and photographer Joshua Kissi, For Love & Country examines country music through the personal stories of a new generation of Black artists, who are helping to transform the genre. The Amazon Original film will be released on April 7 in the Amazon Music app and on Prime Video.

"What I’ve come to realise is country music as a genre is just as complex as this country itself,” said Joshua Kissi. “Now is the moment to stand up for the voices that have always mattered throughout time, especially the musicians who didn’t get the credit when it was due.”

“I’ve always believed in the old saying, ‘if you can see it, you can be it,’” said Mickey Guyton. “However, it’s no secret there has been a lack of representation of Black artists in mainstream country music for years. That’s why I hope little Black girls growing up now can see us, artists like Brittney, Reyna, Amythyst, Allison, Valerie, Frankie and me, and know they have a place here in country music. We all do.”

In tandem with the trailer, Amazon Music has released Black Myself, an Amazon Original acoustic version of breakout star Amythyst Kiah’s song, recorded during the filming process. Additional Amazon Original songs by artists featured in the film will roll out over the coming weeks, prior to For Love & Country releasing on April 7.

For Love & Country was directed by Joshua Kissi and produced by DPM Projects and Pizza Night.