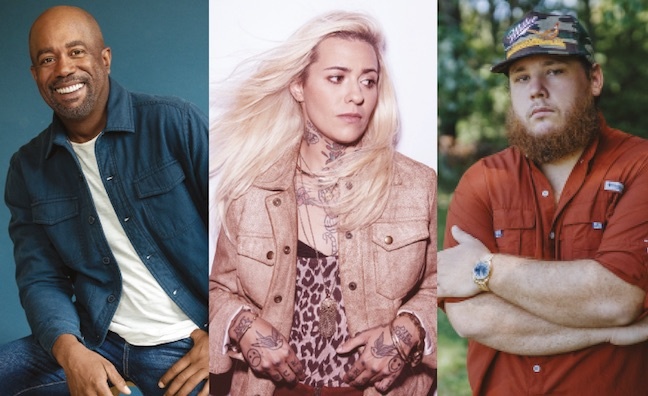 Country To Country is back after a three-year absence.

AEG Presents’ Country To Country was not staged in 2020 or 2021 due to the pandemic. The festival is now set to return to London’s The O2, Glasgow OVO Hydro and Dublin 3Arena on March 11-13.

There was a scare last month when storm damage to The O2's roof forced the arena to close. A temporary fix is in place and the arena and other venues in the complex are not affected.

“C2C is the largest country music festival outside of North America and it’s hugely important on both sides of the Atlantic,” said Milly Olykan, VP of international relations and development at the Country Music Association (CMA) in Nashville. “We have seen in the streaming data how C2C drives a major consumption spike from the festival announcement through to post-event. CMA’s mission is to support the country music industry around the world in order to increase consumption.”

She added: "We use C2C as a connector and a converter. Our UK and EU industry network will meet there, along with industry over from Nashville. As a country music network, it’s our joint responsibility to utilise C2C in bringing together influential gatekeepers and have them won over by the music, the engagement and surprising demographic of the fans - younger and more diverse than perceived - and also how proactive and committed we are as an industry community.

“As a trade association for a genre, we have developed a strong international network that we pull together regularly in order to proactively identify how we can increase the profile of our genre and reach a wider audience. So C2C is incredibly important as a key calendar moment for us."

Country music has broadened its appeal with crossover acts and an increasing diversity among the younger artists.

"There is something for everyone in country music,” said Olykan. “Just look at the C2C line-up – traditional country stars like Miranda Lambert, who keeps bringing out new music, Ashley McBryde and Luke Combs, who both won over fans at C2C as emerging acts, peppered with some more pop-leaning, high-energy country artists like Russell Dickerson, Breland and Scotty McCreery, and soulful singer-songwriters like Tenille Townes and Brittney Spencer.

“Seeing the diversity represented on C2C is indicative of how fans and industry alike are seeking out more diverse voices."

The CMA is bringing over a number of acts as part of the line-up and surrounding events. Morgan Wade, Priscilla Block and Tiera are performing as part of the CMA’s Introducing Nashville strand on main stages.

“This will be a big moment for Morgan Wade in particular,” said Olykan. “The radio support she has had from BBC Radio 2 has been significant – that level of support has been a first for a new country artist.”

While country streaming is dominated by classic hits by acts including Dolly Parton, Kenny Rogers and Johnny Cash, younger stars such as Maren Morris, Carrie Underwood and Luke Combs also made the Top 20 most streamed country songs last year. Combs’ What You See Is What You Get (Columbia) was the No.3 country LP for two years running. It has 82,002 sales to date (69.8% from streams).

“Luke Combs is a good example of an artist who is country through and through and who has solid streaming numbers in the UK, which is significant because he is clearly being streamed by fans who may not have called themselves country fans a few years ago,” said Olykan. “His streaming numbers have also shifted the narrative of the biggest streamers in the UK being heritage acts.”

However, the absence of touring opportunities for new and established country artists may have held back the growth of the genre.

According to Music Week research, UK streams of tracks classified as country by the Official Charts Company increased by 2.5% year-on-year to 1.4 billion in 2021. That result compares to a 6.4% year-on-year increase for total audio streams.

But Olykan is optimistic about the increasing reach of country in the UK.

"Country music is one of the fastest growing genres in the UK,” she said. “Streaming during the Covid years 2020 and 2021 has been particularly strong with growth in every quarter versus the prior year and this is driven by a combination of factors. The UK country fan is served well by streaming services and country radio. BBC Radio 2’s ongoing playlisting as well as specialist show support of the genre continues to help country music reach a wider audience.”

“The streaming success certainly tells a positive story,” added Olykan. “Once country music tours come back to the UK, we can expect to see a lot of new fans at shows.

“[But] while there are many artists who can’t wait to come back, it may take us a beat to get to the volume of touring we saw in 2019.”

BBC Radio 2 will again be supporting Country To Country as the broadcast partner, including festival coverage. Radio 2 Celebrates Country will shine a spotlight on the genre on air and on BBC Sounds. Bob Harris also presents a new four-part series, 21st Century Country, marking 20 years of performances and interviews aired on his weekly Radio 2 show.

“The personalities at those stations are hugely passionate about growing the genre and aiding discovery,” said Olykan. “For UK talent, the opportunities are there. The UK has the fans and a supportive industry, which includes country radio and streaming services who want to champion local talent.”

Subscribers can read a full report on C2C here.