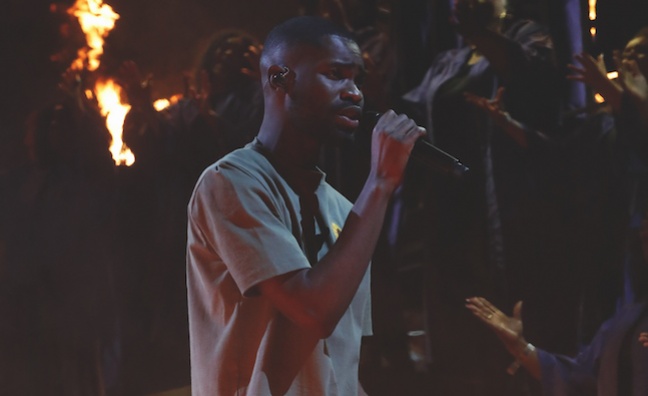 Dave has been forced to postpone his O2 Arena shows this week, as a result of storm damage to the roof.

Part of the tent fabric to the London entertainment complex’s roof was ripped off during Storm Eunice on Friday (February 18).

There has been media speculation that The O2 could be shut for months, although venue operator AEG Europe has described the current closure as “short”. Any repairs are also complicated by continued gales forecast in London.

“Following the adverse weather conditions and The O2’s short closure, Dave’s headline shows at The O2 arena, due to take place on Monday 21 and Tuesday 22 February, have now been postponed to allow time for the site to be event ready,” said a statement.

Updated: The O2 has now said it will remain closed until Friday, February 25.

"The O2 prides itself on being a venue full of entertainment but following Friday’s storm, we’re not quite looking our best," said a statement. "We want to continue to provide a safe and secure best-in-class experience for our visitors, so we have made the decision to remain closed until Friday 25th February to give us time to carry out some necessary works on our roof."

The next scheduled O2 Arena date, from UB40 featuring Ali Campbell, is on Friday, February 25. A Fugees concert originally scheduled for the evening of the storm - February 18 - had in fact been cancelled along with the entire tour due to Covid.

In the coming weeks, there are gigs scheduled for Simply Red, The Lumineers, Davido, The Wanted and Maluma, as well as the return of Country To Country festival on March 11. The festival has not been staged since 2019 because of the pandemic.

Bad news, The O2 have told us Monday and Tuesday’s shows can’t happen. (Storm/roof) we’re doing everything we can to reschedule the shows to play as soon as possible. Have been told it won’t be too long I’ll know more on Monday and will return with a tweet then.. So sorry guys

New dates for Dave at The O2 have not yet been confirmed.

Dave posted on social media: “Not the best news, The O2 have told us Monday and Tuesday's shows can't happen because of the storm and the roof. We are doing everything we can to reschedule the shows to play as soon as possible. Right now we do not know when The O2 arena will be open again for events but they've told us it shouldn't take long at all. I'll release another statement on Monday but it should be very soon.”

Dave won a BRIT award and performed at the ceremony earlier this month. The We’re All Alone In This Together arena run - Dave’s biggest headline shows to date - is promoted by SJM and continues at AO Arena, Manchester on February 24.

See the current issue of Music Week for an interview with Dave’s agent Craig D’Souza, as part of a feature on WME.