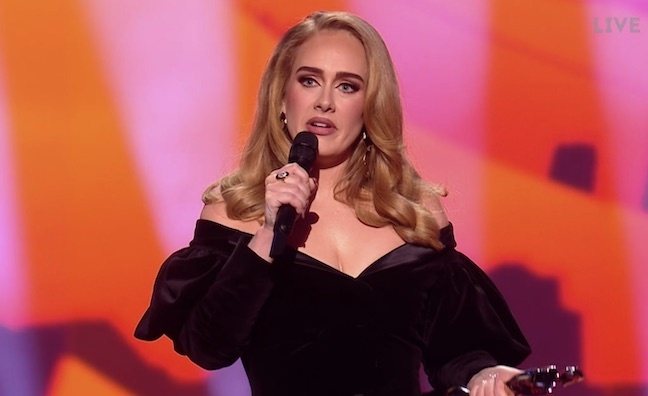 Adele was the big winner at the BRIT Awards with three victories for her 30 campaign. She won Artist Of The Year, Album Of The Year and Song Of The Year for Easy On Me.

Adele’s performance at the ceremony will likely have been a ratings winner on TV and online for the ceremony overseen by showrunner Tom March. The awards show at the O2 Arena aired live on ITV and ITV Hub, as well as via YouTube globally.

While this year’s BRITs honoured the phenomenal success of Adele’s 30, it also marked the arrival of newer artists and first-time winners including Little Simz, Wolf Alice, Becky Hill and Olivia Rodrigo, as well as BRITs Rising Star Holly Humberstone.

The ceremony was hosted by comedian Mo Gilligan on his debut outing. It also marked the first year that gender-based categories were scrapped, although any concerns that women would lose out were not realised (Adele won the UK artist category, while Billie Eilish won for international). Like 2021’s BRITs, women (or groups featuring women) dominated the awards, with 10 out of 15 wins.

Polydor racked up the most wins on the night (five), followed by Columbia with three.

Universal Music came out on top as a corporate group with six wins for six different artists (plus their role as digital distributor for Wolf Alice via Ingrooves). Sony Music had four victories (including for Little Simz as parent of AWAL), while Warner Music had three.

The BRITs was opened with an unlikely rock-pop mash-up between Ed Sheeran and Bring Me The Horizon.

Little Simz gave one of the standout performances on a stage she had graced six months’ earlier when the O2 re-opened with a gig from Gorillaz.

Tom March, an Oasis fan, booked Liam Gallagher for a performance of new single Everything’s Electric, which is chasing a Top 10 entry this week.

During the second half of the ceremony, Adele’s majestic rendition of I Drink Wine had fans at The O2 chanting for more.

The Columbia-signed artist scored the biggest-selling album of 2021 and 30 now has sales to date of 650,741, according to the Official Charts Company. The BRITs should now give the LP a further sales boost.

Adele became the first solo artist to triumph in the Album Of The Year category three times. Her total of 12 BRITs (including the first ever Rising Star trophy in 2008) consolidates her status as the most successful female solo artist. Robbie Williams has 13 as a solo act as well as wins with Take That.

“I can’t believe a piano ballad won up against that many bangers,” said Adele after her Song Of The Year victory for Easy On Me. “I always love coming and the BRITs has always been such a big part of my career, from way back when I was a… foetus.”

After collecting her second award of the night, for Artist Of The Year, Adele said: “I understand why the name of this award has changed, but I really love being a female artist, I’m really proud of us.”

For the Album Of The Year trophy, she thanked producer Inflo for his influence on the record and her life.

Wolf Alice won the Group category, for which they were nominated once before in 2018. It marks a significant breakthrough for the band, who finally hit No.1 last year after narrowly missing out with their first two albums.

The band’s Blue Weekend album has sales to date of 82,233, according to the Official Charts Company.

“We’d like to thank our record label Dirty Hit,” said bassist Theo Ellis. “Without them, we’d never have got here.”

Some viewers may have been surprised to see Little Simz win for Best New Artist, seeing as the critically acclaimed Sometimes I Might Be Introvert is her fourth album. But it’s the first time she’s been eligible following her Top 40 bow. The independently-released album peaked at No.4 and has sales to date of 29,821.

Little Simz, who collected the award with her mother, gave an acceptance speech to match her performance.

“I’m an independent artist and to be here tonight receiving this award is such a blessing,” she said.

The new genre categories were publicly voted via TikTok and saw victories for first-time winner Becky Hill (Dance). Hill was presented with the trophy by David Guetta and Pete Tong, and gave an emotional speech in which she expressed her love of dance music and appreciation for her label, Polydor.

“I need to thank my manager, Alex [Martin], who funded me when I was 18, just off The Voice,” she said. “I had no money, he saw me through getting dropped from a record deal, starting my own record label and signing again to the amazing Polydor.”

There were also wins for Sam Fender (Rock/Alternative), who performed his Top 3 indie banger Seventeen Going Under, Dua Lipa (Pop/R&B) and Dave (Hip-Hop/Grime/Rap).

Ed Sheeran had a disappointing night at the BRITs in 2018 and he lost out again in 2022. Despite scoring the second biggest album and biggest single of last year, he didn’t win any of the four awards for which he was nominated.

However, a BRITs judging panel did honour him with the title of Songwriter Of The Year. Sheeran is also up for one of the big Grammy awards this year for global smash Bad Habits.

Billie Eilish won for the third year running having triumphed in the Female International Artist categories in 2020 and 2019.

Olivia Rodrigo, who attended the ceremony with co-writer Dan Nigro, won her first ever BRIT with Good 4 U in the International Song Of The Year category. The double-platinum No.1 single has sales to date of 1,473,888.

UK rap star Dave, who gave a memorable performance in 2019, topped that by closing this year's show with In The Fire, featuring guests Fredo, Meekz, Ghetts and Giggs, and his own flaming guitar solo.

Artist Of The Year

Song Of The Year With Mastercard

Adele - Easy On Me (Columbia)

Mastercard Album Of The Year

International Song Of The Year

Songwriter Of The Year

Producer Of The Year