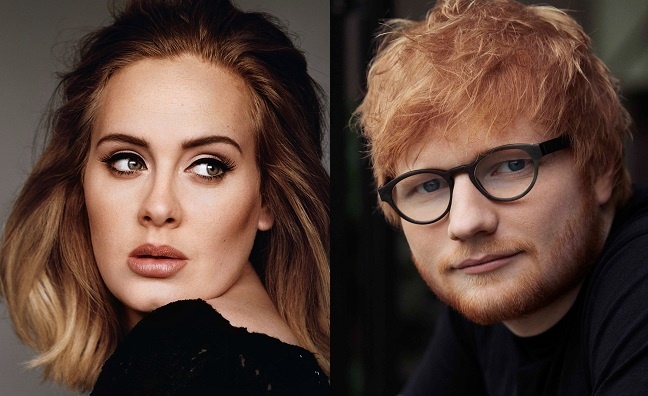 The figures are in for the end-of-year charts and - no surprise - Adele and Ed Sheeran have come out on top.

Adele’s comeback album 30 (Columbia) went double platinum even though it was only released in November. The LP racked up 600,056 sales, according to the Official Charts Company.

That total included 12,519 physical singles, a result actually bettered by Sheeran’s single Shivers, which finished at No.15 (865,896) and ended up with 13,619 physical sales. Although it doesn’t make the Top 100 of the year, Sheeran’s festive collaboration with Elton John, Merry Christmas, has moved 13,835 copies on CD. It suggests that the singles market could be next in line for a CD and vinyl revival.

It also means that UK artists topped both singles and albums charts for 2021. Lewis Capaldi secured the double on both charts in 2019. Eight of the Top 10 albums were by UK acts in 2021.

Perhaps the big story in the end-of-year albums chart is the further streaming boost for catalogue. According to Music Week research, 59% of the Top 100 for 2021 are catalogue titles (like MRC Data’s reporting in the US, catalogue is defined as any release older than 18 months, or a greatest hits collection).

In 2020, catalogue accounted for 56% of entries, based on Music Week research.

BPI chief exec Geoff Taylor spoke to Music Week last year about the switch from a payment model to consumption. With streaming now accounting for more than 83% of the recorded music market, it’s a clear long-term opportunity for catalogue releases with an existing fanbase.

Noel Gallagher makes a further appearance with Noel Gallagher’s High-Flying Birds at No.93 with Back The Way We Came - Vol.1 (70,048).

Olivia Rodrigo was the biggest breakthrough of the year. Rodrigo secured second and third place in the singles chart with two million-selling singles - Good 4 U (1,394,252 ) and Drivers License (1,303,844).

Rodrigo, who had been on top with the biggest-selling album for much of the year, narrowly missed out on the Top 3. Music Week’s Artist Of The Year made No.4 overall with her debut Sour (Polydor/Geffen), which racked up 395,323 sales (82.9% from streams).

Glass Animals achieved a global singles breakthrough with Heat Waves (Polydor), which finished at No.8 in the UK year-end rundown (982,499).

10 Dave – We’re All Alone In This Together

4 The Weeknd – Save Your Tears