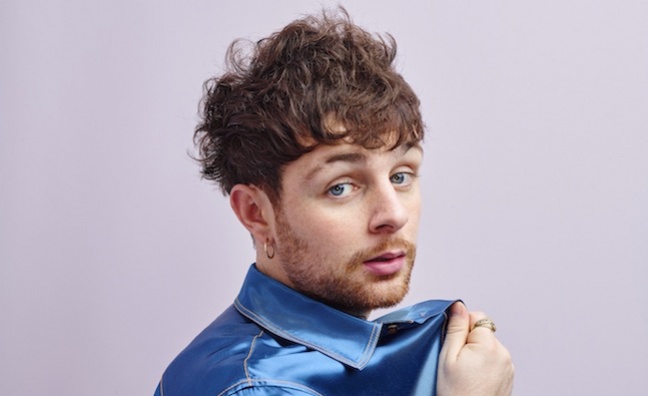 On his first album, Tom Grennan became a breakthrough artist.

Now, on his second album, the UK singer-songwriter is a streaming and airplay star. In the latest Midweek sales flash, Tom Grennan is at No.6 with Little Bit Of Love. Sales are up 12.3% week-on-week and the single is now officially silver with a total of 201,097 sales, according to the Official Charts Company. The single is at No.8 on the UK radio airplay chart.

Tom Grennan also has a No.9 singles chart entry with Ella Henderson collaboration Let’s Go Home Together (Asylum/Major Tom’s), sales of which are up 12.3% week-on-week (149,246 sales so far). It’s currently a No.3 airplay hit.

Following the No.1 entry for his second album Evering Road last month (27,194 sales to date, including 9,055 from streams), the Top 10 double in the Midweeks marks another career landmark for Tom Grennan and his label, Insanity Records. In the latest issue of Music Week, Insanity Group founder and CEO Andy Varley opens up about the rise of his chart star, the launch of a live agency, the company’s radio stars and much more in our in-depth Music Week Interview.

If Little Bit Of Love can break the UK Top 5, Grennan will have matched the highest-charting single for Insanity Records. The label previously peaked at No.5 with Craig David’s Bastille collaboration I Know You in February 2018 (the wider group has had No.1 singles for management clients).

Tom Grennan currently has 6,456,041 monthly listeners on Spotify, with more than 40 million streams across his two current hit singles. Little Bit Of Love reached a global streaming peak over the weekend.

The current campaign follows the success of 2018 debut Lighting Matches, which peaked at No.5 and has sales of 108,321 (including 76,356 from streams). Here, Andy Varley talks artist development, how the pandemic affected the follow-up LP and international opportunities for Grennan…

How have you developed Tom Grennan as an artist?

“We signed Tom back in February 2016. We went to see him play at a pub called The Finsbury, and fell in love with his incredible voice. He was only 20 and had spent most of his life playing football, so he didn’t really know what ‘being an artist’ was. We noticed straight away that every time he went into a session, he would write something incredible, and over the past five years his songwriting has got better and better. He knows who he is as an artist now, he is real, he is honest, and his songs are so relatable. He is also one of the most formidable live performers I have ever worked with.”

How did he take to co-writing early on?

"What sort of blew us away very quickly was that Dan [Lloyd-Jones, then Sony/ATV and now at Island] started putting him in writing sessions, including this one particular writing session with Chase & Status. Out of that first writing session, they wrote All Goes Wrong, which Tom then featured on further down the line. That's still streaming incredibly well now, and it was actually just part of a big TV ad sync. So we loved Tom, we thought he was amazing. He was just about to sign with Various Artists Management, we put in an initial offer and we signed Tom [to the label].”

The debut is gold and moved over 20,000 units last year. How has it helped established him as a streaming artist?

“Tom is an amazing artist development story. Lighting Matches was his entry point into music, it helped him figure out who he was as a person and as an artist. The songs all meant something to him and he went on a real journey writing it. The marketing campaign led by Alice Beal [GM] and Emma Seccombe [senior marketing manager] was phenomenal. They left no stone unturned, and transformed this slightly shy, football-loving college kid into a bonafide artist. Streaming was difficult on that album, there certainly weren’t the entry points in terms of playlists that there are now that he has embraced a more commercial sound. Despite that, we worked hard and got some really great support from DSPs across the board, and that support has certainly moved up a gear with Evering Road.”

How did the lockdown affect the follow-up release plan?

“We actually started the campaign in January last year. We dropped This Is The Place, which was a big radio airplay record, and we saw a pretty big spike in our streaming support. We were just getting going with plans for the next single, and then Covid hit and we went into a national lockdown. It was really tough, we felt like the rug had been pulled from underneath our feet. Fortunately, we hadn’t announced the album so we just decided that we should keep putting out music to keep the fanbase engaged. Tom embraced social media in a big way, and we just kept going. We changed our album release plans several times as the reality of Covid became clearer, but we got to the point where we just thought to ourselves, ‘We have an incredible artist, an incredible album; we just need to set a release date and run at it’ – and that’s what we did.  Spotify, Apple, Amazon and YouTube all gave us consistent support throughout, which was incredibly important considering there were little/no promo opportunities.”

He's now made a singles chart impact – is that significant for this campaign and helping take him to the next level?

“Believe it or not, despite having a gold selling Top 5 album with Lighting Matches, Tom had never had a Top 40 single before. When Alastair Kinross and Chris Briggs [Sony A&R] first played us Little Bit Of Love about 18 months ago, we all got incredibly excited. In late 2019, I flew around Europe playing it to different markets, and everybody agreed that it could do some damage! We released it in January [2021] and the support from our retail partners was incredible from day one. We have seen week-on-week growth ever since, and it continues to climb the charts as we hoped it would. Whilst Tom is most definitely an album artist, having hit singles really helps to broaden out the campaign.”

How will touring, including his Ally Pally show, boost the campaign later this year?

“We have worked incredibly hard with Tom’s manager John Dawkins and live agent Matt Bates to really build him as a serious hard ticket selling artist. Tom actually sold out Brixton Academy before he had released his first album, which was completely unprecedented. We announced a Q4 UK headline tour last week, and many of the dates, including Ally Pally, are close to sell-out despite Covid concerns. We are doing a European run next March, and when it is safe to do so, we will take him to the US. We still have some big singles to drop before the tour, so it will be a busy year for Tom!”

To read the Music Week Interview with Andy Varley, subscribers can click here.