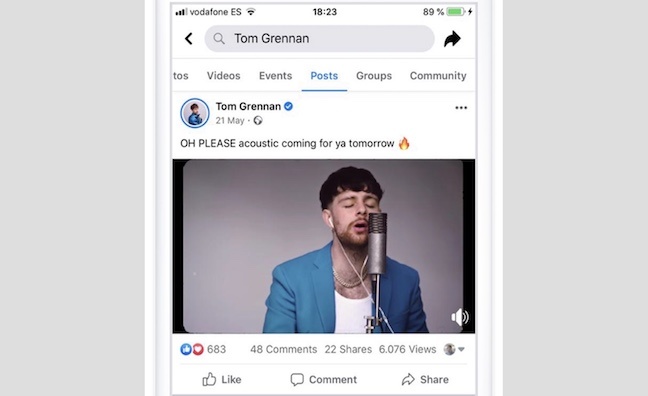 Facebook has revealed how the platform has helped support emerging artists during the Covid-19 pandemic.

In a blog post shared exclusively with Music Week, the social media giant has revealed new data on the positive impact for acts using both Facebook Live and Instagram Stories while live touring has been halted during the coronavirus.

“Creativity was the common thread throughout all the artists’ efforts which resulted in new fans and growth,” said the blog post, which referenced music performances and exclusive artist content, as well as everything from pub quizzes to cooking series.

Across Facebook and Instagram, L Devine shared unique sets, took requests and answered fan questions. The social media activity resulted in a 48x increase in organic and paid video views on Facebook for March 20 to May 20 compared to the two months before.

Tom Grennan is a more established artist on the rise, who’s also relied on the platforms during the pandemic. Grennan is preparing to release his sophomore album Evering Road (Insanity Records) on March 5. His 2018 debut Lightning Matches has sales to date of 97,446.

Following the cancellation of his European tour, UK singer-songwriter Freddie Long used green screen technology to adapt the backgrounds of his live performances to landscapes of the countries in which he was supposed to perform. Facebook said that creativity resulted in a 925% increase in Facebook video views over the two-month period.

Irish rock band The Pale shared weekly VOD performances on Facebook Watch and IGTV and saw a 295% increase in video views on Instagram.

Some artists have reimagined the performance experience online. London-based collective House Gospel Choir recorded rehearsals individually and then edited those together to give their fans full performances every Sunday on IGTV and Facebook Watch. This creative content increased their video views on Facebook by 578%.

Musicians also used this time to share personal experiences during isolation with fans. Indie act Penelope Isles took followers behind the scenes via Instagram Stories and Facebook Live to show the process of recording a new album in isolation. Connecting with their fans in this way saw a 94% increase in video views on Instagram, and an 88% increase in overall follower growth rate.

Alternative trio Cruel Hearts Club created a video performance series called Stay Home Music Sessions, and shared pre-recorded performances and covers on both Facebook Watch and IGTV. This boosted their number of Facebook followers by 68%, and generated a 136% increase in video views on Instagram.

According to Facebook, joining forces with other content creators increases the chances of growth and success for artists.

DJ Ellie Prohan shared music and hobbies with her fans and followers, and also brought in special guests to collaborate. It resulted in a 94% increase in video views on Instagram.