Tom Grennan conquers radio and streaming - can he reach No.1 with his Evering Road album? 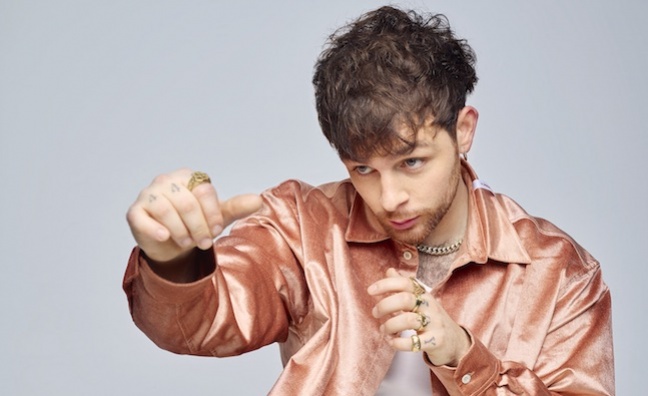 (Updated: The album reached No.1 with 17,322 sales, according to the Official Charts Company.)

As well as strong physical sales, Tom Grennan is performing well on streaming and has almost 4.5 million monthly Spotify listeners.

Andy Varley, founder and CEO of Insanity, noted the “phenomenal support from all of our retail partners at Spotify, Apple, and Amazon".

“Evering Road is an important release for Tom,” he told Music Week. “The team have worked through incredibly challenging times to deliver the campaign remotely, and our ambition has never been greater. Lighting Matches charted at No.5 and we certainly hope to improve on that this time around.”

Lighting Matches is certified gold with sales of 105,590, according to the Official Charts Company.

When the pandemic hit, Grennan’s team at Insanity and Various Artists opted to continue releasing new music until the time was right to announce the album.

Last month, Tom Grennan cracked the Top 40 for the first time in some style with two singles entering the chart in the same week. As well as his single Little Bit Of Love (No.26 peak, 64,403 sales), he went Top 30 with Ella Henderson collaboration Let’s Go Home Together (No.28 peak, 34,427 sales).

“Ella Henderson approached him to feature on Let’s Go Home Together and it made total sense,” said Varley. “It felt like it was written for Tom!”

Varley pointed out that last week Tom Grennan was the biggest radio airplay artist in the UK with 61 million impressions across both singles. Let’s Go Home Together climbed from No.42 to No.3 on the UK airplay chart, while Little Bit Of Love was at No.9 on airplay.

As well as the UK success, Varley and the team at Sony Music are building the campaign internationally.

“Little Bit of Love is performing really well for us across Europe, and we are working hard with Mark Collen and our partners in all international markets to amplify the noise we are making here in the UK,” said Varley. “Last week, the single jumped 20 spots to No.53 in the European airplay chart. At radio in Europe, the single features in airplay charts in Belgium, Germany, Switzerland, Sweden and The Netherlands.

“In the US, our streaming is up 20% week-on-week. We had some phenomenal international retail marketing support around the album release, and despite the challenges of international travel, Tom is doing a lot of promo from home, thanks to Zoom. We have always seen Tom as a global artist proposition, and our partners and I feel confident that we can take him all the way!”