St. Vincent stars on the cover of the new edition of Music Week 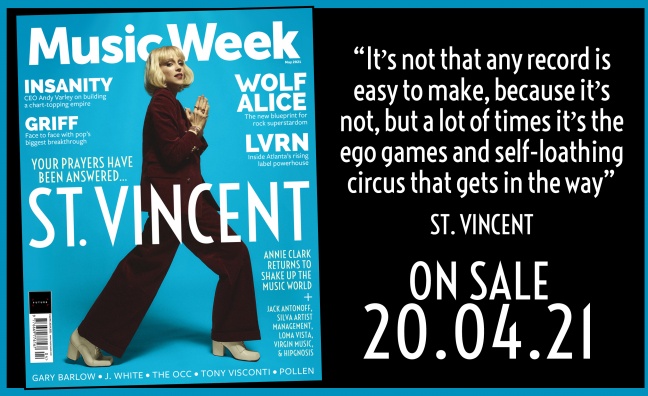 Music Week is delighted to reveal St. Vincent as the cover star of our new deluxe 100-page monthly print edition.

In our huge interview, Annie Clark is joined in conversation with super-producer Jack Antonoff to discuss everything from the making of her incredible new album Daddy’s Home, to songwriting and her journey so far as an artist.

Starring alongside Clark and Antonoff to give campaign insight is her manager John Silva (of Silva Artist Management), plus Loma Vista’s Ryan Whalley, Virgin Music UK’s Vanessa Higgins, Virgin Music International’s Jim Chancellor, and Hipgnosis’ Merck Mercuriadis and Dave Ayers. This is the ultimate in-depth look at the album that seems primed to take St. Vincent to the next level…

For The Music Week Interview, we quiz CEO and founder Andy Varley about the rise of Insanity Group following the chart-topping success of Tom Grennan last month. In a career-spanning interview that goes back to the formation of the company when Varley was still a teenager, he talks us through the key deals and the expansive Insanity operation Plus, Sony Music UK CEO and chairman Jason Iley and Tom Grrennan share their insights on the Insanity boss.

Also inside, we lift the lid on Wolf Alice’s blockbuster campaign for their third album Blue Weekend, joining the band, Dirty Hit boss Jamie Oborne and East City Management’s Stephen Taverner as they lay out their new blueprint for global success and set their sights on landing their first UK No.1. Later… With Jools Holland’s Alison Howe also looks back on the landmark performance that kicked off the campaign.

Elsewhere, following breakout success for Summer Walker, 6lack and more, we catch up with the five co-founders of Atlanta label LVRN to find out how the collective formed by Carlon Ramong, Justice Baiden, Junia Abaidoo, Sean Famoso McNichol and Tunde Balogun has become the music company the whole world wants a piece of.

Plus! We go face to face with a major new force in pop as Music Week meets BRITs Rising Star winner Griff. At 20 years old, the Warner Records signed star-in-waiting is making waves, and we find out more from her and her team, label president Phil Christie and manager Deleon Blake. We also have a big interview with producer Tony Visconti, who candidly reflects on his incredible career so far, his work with David Bowie and the downsides of the modern music industry.

On top of that, Zeon Richards – who has built a reputation as one of the UK industry’s most influential executives – talks us through his big move from Ministry Of Sound to Pollen earlier this year and unveils his vision for the future of hip-hop. There's also an in-depth interview with Official Charts Company chief executive Martin Talbot, who talks about some of the exciting developments in the world of the UK charts...

Finally in features, this month’s special report gathers the biggest names in neighbouring rights to find out how this crucial sector of the business is evolving.

In Hitmakers we speak to producer extraordinaire J. White to get the story of Megan Thee Stallion & Beyoncé’s Grammy-winning, TikTok-conquering smash Savage. Aftershow, meanwhile, sees Take That legend Gary Barlow guide Music Week through his career, including his disastrous turn at acting…

In this month's Big Story, ICM Partners’ head of international Matt Bates looks ahead to the return of live music after the pandemic. A year on from ICM aligning with London-based Primary Talent International, the top live exec - whose artists include The 1975, Wolf Alice, Pale Waves and Beabadoobee – shares his optimistic outlook for the sector as the touring business grapples with both Covid and Brexit. Elsewhere in the news section, we crunch the numbers on Q1 breakthroughs by UK debut album artists this year with insights from the BPI, Polydor, PIAS, Transgressive and Spotify.

For our Spotlight Q&A interview, Disturbing London's Dumi Oburota talks TikTok, Tinie, Yxng Bane and his support for the PRS Foundation diversity initiative Power Up. Also in Frontline, you’ll find AI Music Discovery platform Andrson in new tech feature Start Me Up plus Frances talks about her Ditty In A Dash show for In Pod We Trust.

On The Radar this month is YouTube sensation Dodie, who talks about mental health, her millions of fans and her incredible debut album Build A Problem in a revelatory interview. This month’s Tastemaker is Vevo new music expert Carl Young, while Atlantic’s new signing Dylan Fraser is in Making Waves. Sync Story examines Warner Chappell’s success with epic new Tina Turner film, Tina.

In Rising Star we meet Alfred Afari, radio plugger at All Ears and chief executive of events brand The Pit London. As retail throws open its doors once again, we ask ERA CEO Kim Bayley about how the reopening of record shops will impact the music business in The Big Question

Key Releases is busy as ever, with Gary Numan opening up about his upcoming album Intruder and manager Claire Moon unpicking the campaign for Paul Weller’s Fat Pop Vol.1.

For this month’s Mentor Me page – a collaboration between Music Week and Girls I Rate – we welcome the incredible director Ashleigh Jadee to get her Top 5 career tips for making it in the music industry.

Deviate Digital boss Sammy Andrews looks at the world of – what else!? – Non-Fungible Tokens in her Digital Discourse column while Music Venue Trust CEO Mark Davyd gets to grips with rejuvenating London and other major cities with music in Centre Stage. As ever, the expanded Archive section sees us flick through the pages of the Music Week of yesteryear.

The new issue of Music Week is available to subscribers from April 16 and on the news-stand from April 20.