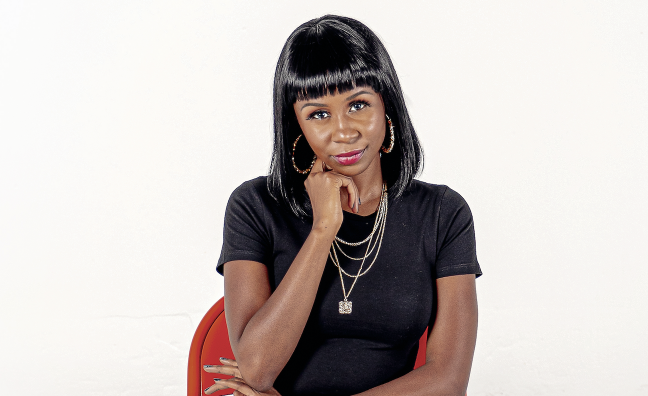 Adele White started her career at BBC Radio 1 & 1Xtra, and has helped shape a new generation of black music. Here, Island’s senior A&R manager, urban division, reflects on her story so far and calls for change...

“I learned the skills to be an A&R without really knowing it. We were quite young to be around so many famous people all the time, I guess that’s why so many people wanted to work there. When Jennifer Lopez and Gwen Stefani were in I was gassed, those were people I never thought I’d meet or see. I met Adele too. She said, ‘Hi my name’s Adele’, and I said ‘Hi my name’s Adele too’ and she started laughing. That was a bit surreal. I knew from when I was very young that I wanted to work in spaces where there were black people, who looked like me and were from similar ethnicities and communities. Dellessa James helped me a lot and my manager Ruby Mulraine was really big on my development. I knew about racism, but at a place like 1Xtra where they have to have you, it’s harder to execute the barriers that exist in other places.”

Have you experienced racism in music?

“I really noticed something was different when white people would come into the same spaces and jobs, and their careers seemed to advance a lot quicker. Sometimes, you’d be training someone up and then they’d get a promotion. They seemed to get better contracts. That happened consistently. To be an A&R, you have to be a leader. I don’t know if I’d want my daughter to be an A&R. Black women are supported in subordinate roles, then once you start to become successful, the love and the empathy you receive are gone. There aren’t many black women in powerful positions. When I entered records, I used to get told about Jackie Davidson, that was the reference point for a lot of white people.”

Bringing through new black execs is important. There’s no point in being one of one

Was there much talk about diversity when you moved to labels?

“It wasn’t a conversation. I was told I was at Relentless for urban; I was like, ‘Cool’. At the start I was in once a week, consulting. I didn’t even know what an A&R was. I didn’t know what High Street Kensington was. The more they got to know me it was like, ‘Oh you’re not just good at that, you know a lot about music, you know shit.’ Because I’d worked at the BBC for six years! I had to prove [myself]. Shabs [Jobanputra] was an incredible mentor. I guess he saw my talent and wanted to see if I could follow through. Relentless was a good place to start because they had a lot of history of black music charting, it was aspirational. Shabs and I spoke every single day and Jason Iley was very involved. I felt like my work was being acknowledged, regardless of my race or sex.”

Is the future positive for black women in music?

“It’s hard, as a black woman, to know that there aren’t enough black women getting the same opportunities, but it’s something we all have to fight for so the next generation has more opportunity, feels included and can dare to dream. You don’t have to be Beyoncé or Rihanna; you can be whoever, if you’ve got art and people like it. For black women, whether they’re artists or not, it’s difficult all round. We’re dealing with skin tone, hair texture or what white men find attractive. That’s where racism is really fucked. Bringing through new execs is important. There’s no point in being one of one. A lot of the time [labels] want one black person to do the black music, but it’s about building teams of young black execs.”

And what will happen to the word ‘urban’?

“There’s a conversation going on internally at Universal [about it]. In some territories, ‘urban’ is seen as very positive thing, I believe it has different meanings in different countries. In the UK, it’s been used as a PC term for 'black' for people that felt uncomfortable. I think people feel it’s stigmatised. People may feel that urban isn’t given the same respect in the UK or, I don’t know, not treated the same. Maybe we don’t need it as much, but I know it’s important in other territories. If we’re working with black artists, there’s nothing wrong with saying that, in the same way there’s nothing wrong with saying dance or indie. ‘Black’ isn’t a bad word, to specialise in music that comes from a diaspora of people that you may understand better for whatever reason. Black music has always existed and there’s nothing wrong with saying ‘black music’ or ‘music by black artists’, it’s positive.”