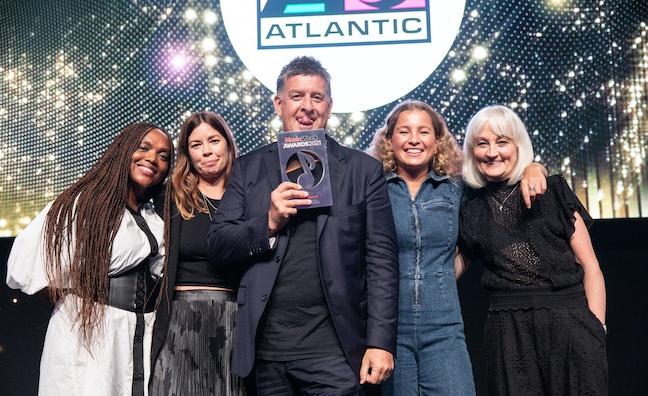 Damian Christian is back.

The Atlantic Records exec never went away, of course, but he’s now once again the official champion in the Promotions Team category at the Music Week Awards. Christian’s triumph last month makes it 11 wins out of 13 for Atlantic and his team, who regained the trophy as the ceremony returned for its first in-person event in more than two years.

“You’ve got to fucking liven up right?” said Christian immediately after his sweary acceptance speech. “It feels amazing. I’m buzzing. It’s a great feeling, really happy. All of our friends, all the people around us, it’s a great night.”

The awards reflected success in 2020, when Atlantic managed to break artists including Nathan Dawe and establish Joel Corry as a chart star.

Christian, who’s managing director and president of promotions for Atlantic Records UK, made a determined effort to keep the industry united during the pandemic, including getting artists involved with virtual charity quizzes.

“We did lots of quizzes and we kept the whole industry together,” he told Music Week. “We didn't actually have our biggest year ever in terms of records, but we had a year of just being the Atlantic Records promotions team and keeping the industry together. I’m fucking buzzing, I’m not even joking. It’s a special year to win it. It’s the first year back. We’ve won it in a lockdown period, and this year we’re actually stronger, so we’d better win it fucking next year as well.”

Joel Corry first emerged in 2019, but truly established himself as a chart star in 2020. MNEK collaboration Head & Heart was the biggest-selling single of 2020 released that year and now has 1,965,358 sales to date (Official Charts Company).

“Breaking an act in that time was very hard,” said Christian. “Joel and Nathan were dance records and they were really hard to plug to be honest, because people didn't know who they were, it was, ‘Who is Joel Corry?’ ‘Who is Nathan Dawe?’ Now, everyone loves Joel Corry, but when we started it was like, ‘Who’s he?’ But I had that with Ed Sheeran, Stormzy and Bruno Mars. It was a tough year, but our contacts were amazing.”

It’s an amazing feeling in the label now

Christian credited the work of his team during a challenging time for the industry. He admitted that radio plugging was “obviously really hard” during the lockdowns, as a typically sociable industry role became a virtual one.

“My team are just the best,” he said. “They’re always the same. They motivate themselves.”

Christian’s claim to the 2022 trophy will partly depend on the Ed Sheeran campaign for =, which launched with Bad Habits (1,197,452 sales). And he said that the album, released on October 29, has more surprises.

“I’ve worked with him from day one, he’s our king,” Christian told Music Week. “It’s brilliant. The record is off the chart, it’s nuts.”

“I’m blessed,” he added. “There’s been a lot of change since the last time I was up there [winning]. It’s an amazing feeling in the label now.”