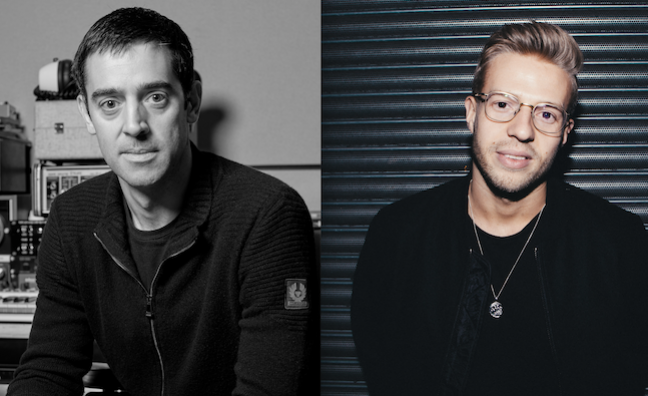 Co-president Ed Howard has overseen the launch of the campaign with Sam Spencer, who Music Week can reveal has been promoted to joint head of marketing alongside Max Lutkin. Spencer was previously senior marketing manager at the Warner Music label for three years, following five years at Sony Music.

“Sam brings an amazing energy and passionate focus to everything he's done at Atlantic so far, we've seen that across a variety of projects,” Ed Howard told Music Week. “We’ve actually been preparing for this [Ed Sheeran] comeback for about a year now, so we've had an opportunity to get to know each other through that.

“It's going to be amazing to have him now apply those skills to a wider range of artists and staff across the label. In terms of working alongside Max Lutkin, Briony [Turner, co-president] and I, we recognise that it takes an incredible amount of focus and energy to set up careers for artists. Working alongside Max and Sam, we will be able to continue deep-diving into artists’ campaigns when they need it. So that's how the structure is going to work for Atlantic going forward.”

“Having started out in digital, and building a strong foundation in audience cultivation and activation, before moving across into marketing at Atlantic in 2018, at this point I feel like I've developed a pretty deep understanding of the marketing function,” Sam Spencer told Music Week. “And I'm just genuinely excited to be able to apply that to the campaigns that we work across the roster.

“We work alongside some incredible people at Atlantic, so I'm just excited to give that focused detail and support to the team.”

As well as an upcoming album from Anne-Marie, more new music from Tion Wayne and rising stars such as Darkoo, Atlantic is now focused on the No.1 Ed Sheeran single Bad Habits and the upcoming new album.

Here, Ed Howard and Sam Spencer take us inside the campaign and big plans for Ed Sheeran in 2021…

Did the sound of Bad Habits impact the marketing campaign?

Ed Howard: “Everyone's recognised that the sonic of the record is unexpected. That is definitely why we leaned into that song, we wanted to do something that would take people by surprise and maybe flip the perception of Ed. To be fair to him, actually, Sing was a gigantic jump forward on album two. I remember exactly the same conversations then. I think Shape Of You on the third record broadened him out hugely, again. In a way, it’s actually no greater jump forward than those two from those albums. But we’ve certainly enjoyed that, and it's given us a lot to play with on the marketing side.”

Sam Spencer: “In terms of the marketing campaign, we basically just needed to be as bold and as arresting as the sonic that Ed has provided. We just needed to catch everyone's attention and really make Ed’s return felt  around the world. The video is directed by Dave Meyers, and it's based around a vampire alter ego of Ed’s. That certainly was the cornerstone for the whole campaign, which we built out from. It provided a really good base for creativity and some fun global activations for the fans. We wanted to make sure that every part of the campaign turned heads, was slightly unexpected and created conversations, not only in the fanbase but in the wider pop music audience as well. I think that's been done really well so far.”

The quality of the music that is coming is incredible

How has the international roll-out gone for Bad Habits?

EH: “There are some really long-standing relationships there that go back to the very beginning, and that have been forged over time when he has been travelling the world. He and his management team have unbelievable relationships with everyone within the Warner family, and promoters, agents, radio stations. He's unique really in that regard around the world, he has personal relationships pretty much everywhere, and he's been travelling, showing love and enjoying it for 10-plus years, so it's really built on that.

“Sam has done an amazing job this time around communicating with that wide group of people, alongside Ed’s management and our team. We've been really close with our American partners, in particular, making sure that this is set up perfectly to a tee there. We've seen the results in the start that we've had, not only the No.1s in certain territories, but the creative landing, the track building and the start at radio has been fantastic.”

SS: “He's certainly come out in a big way, and especially after being away for a certain period of time. We fully expected the single to come out of the gates in a big way, but then take some time in certain areas of the world to connect fully. We're really starting to see that come through, which is great. It looks like we've got a big summer hit on our hands, so it's about how we can keep that building across this summer with more content drops and some really exciting remixes.”

How will you maintain momentum for Bad Habits this summer?

SS: “We're going to have an always-on content strategy dropping weekly - there will be really intricate and detailed pieces of content that fans will love around the world. We've got some incredible remixes to drop alongside this. Reconnecting Ed’s incredible personality with the world is the order of the summer, and he seems to be really enjoying that at the moment. He's reconnecting with people that have supported him over the last 10 years. He genuinely seems to be having fun being back in promo, which is great to see, so there will be more of that over the summer as we set up the next phase of the campaign.”

How important is his direct involvement in the campaign?

EH: “He's always been a huge driving force of the creative process, but then also the promotion process, he's leaned in and enjoyed it as much as, if not more than, any artist I've worked with. People can see that he really values the human connection. He’s a loyal person, he's very loyal to his team and he values people that supported him on his way up. He goes back and spends time with people, it just creates an amazing atmosphere. Seeing him doing those interviews or signing CDs, it's not normal superstar behaviour but it's really charming and it goes a long way with Ed.”

SS: “Ed really does set the bar high in terms of the work ethic and the attitude. It is something that really inspires the team. Not only can he write the hits, he just seems to have an incredible marketing mind and a level of creativity that I've never really seen in an artist before. He knows exactly who he is at this point, but he's always trying to look at new ways to do things and connect people with his music. So it's really refreshing, and seeing the rewards and the results when we get it right is always really great.”

How did the TikTok Euros 2020 performance make such a huge impact?

EH: “It started from a conversation between Paul Hourican [head of music operations] at TikTok and Ed’s management - Stuart Camp and Gaby Cawthorne - and the three parties then came together and took that forward. And, actually, it was surprisingly recent that we started talking about it. It felt like an amazing opportunity, the potential of doing some form of live show which he hadn't done for a long time, and then on top of that the Euros as well. The timing coincided with the single really well. We were able to build so much around it.”

SS: “It was a great entry point to the platform for Ed. In true Ed Sheeran style, he achieved the biggest livestreamed performances on the platform ever. The best part of it was seeing Ed's involvement and understanding of the platform skyrocket through the process. I think that's going to be invaluable for the campaign going forward, just making it a place that he wants to be.”

EH: “In terms of the show itself, I just wanted to shout out Paul Hourican at TikTok, also David Mogendorff [head of UK artist partnerships] who was incredible and their team. But also, in addition to all at Atlantic that worked on it, Ed's live team as well, who had to come together and put that show on were amazing, as well as the creative director Emil Nava and Hamish Hamilton, who directed it. So it was a brilliant coming together of Ed’s management and live team, one of Ed's long-term creative collaborators Emil and then the TikTok and Atlantic groups. Everyone really pulled together in a very short space of time to do an amazing job for Ed and get the single off to a great start.”

Not only can Ed Sheeran write the hits, he just seems to have an incredible marketing mind

What are the plans for the rest of the year for Ed Sheeran as you build towards the album release?

SS: “The single will continue to reignite the global fanbase around that across the summer, then he’s going to be hitting the international promo run through the second half of the year. He's got the + album 10-year anniversary in September, so Ed's got some really exciting fan-focused ideas around that. Just expect lots more amazing creative output, some exciting curveballs to come and more hard work and presence from Ed.”

EH: “Sam's talked about Ed’s energy and what he brings to things. I would add that the quality of the music that is coming is incredible. It just gives you so much as a record label to work with and to brainstorm around. I’m just excited, we've kicked it off in a really creative and novel way. We just want to continue that, have fun with it and celebrate how amazing the music is. We want to try and challenge ourselves and challenge Ed to match that quality in every other thing that we're doing. So it's going to be really challenging for sure, but it's going to be fun. It’s just inspiring to have Ed setting the bar so high for us.”

Finally, following the huge success of ÷ what are the hopes this time? Do you still have big expectations?

EH: “Absolutely we do, and he certainly does for himself. I think the way that you meet those expectations is through pushing forward, you can't really ever look back. I don't think it's worth necessarily spending too long comparing what we're achieving now to some of the most consumed, biggest-selling music of recent times. The way that you try and achieve that is to really stay relevant, stay creative, try and engage new fans, younger fans, keeping your old fans engaged. And that is not by trying to repeat what you've done in the past. We’ve started off on the right foot in trying to do new things. We'll keep that as our focus, and hopefully everything else will fall into place off the back of it.”