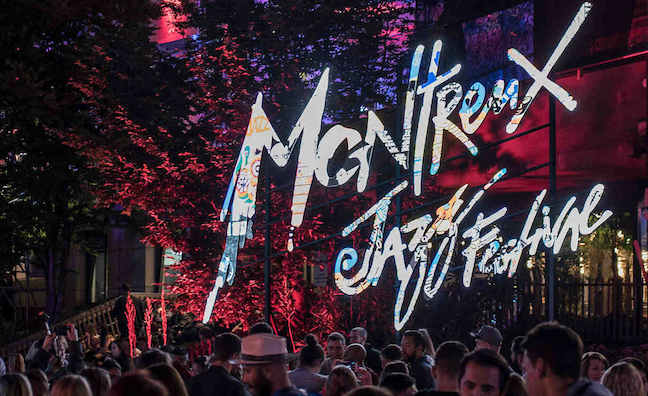 The deal includes the launch of a brand-new collection series, The Montreux Years, and a definitive three-part documentary series celebrating the history of the music festival.

The Montreux Years uncovers legendary performances by iconic artists alongside rare and never-before-released recordings from the festival’s rich 55-year history, all in remastered audio. The releases will be accompanied by exclusive liner notes and previously unseen photography. The recordings are taken from founder Claude Nobs’ extensive collection of audio-visual material (Montreux Sounds). Full details of the first albums in the series will be announced in April.

Thierry Amsallem, chair of the Claude Nobs Foundation, said: “The Montreux Jazz Festival has always been a leading showcase for the international music scene, as well as a meeting place for musicians and music lovers. The magic of Montreux lies in the encounters between musicians. They were unique events that will never be repeated. The idea was always to allow artists to get off the beaten track and avoid replaying their usual repertoire. Here, we treated them like kings and offer them the best conditions in the world, in terms of sound quality and audio-visual recording technology.”

Montreux Media Ventures, the media subsidiary of the Montreux Jazz Festival, BMG, and Beyond TNC are also set to produce a definitive three-part documentary series celebrating the history of the music festival and the life of its inspirational founder and creator, Claude Nobs. Swiss Public Broadcaster, RTS, is also on-board as a co-production partner.

CEO of Montreux Media Ventures, Nicolas Bonard, said, “We believe that everyone should have the opportunity to experience these historic and culturally significant musical performances and, through the preservation work of the Claude Nobs Foundation we hope to bring a bit of Montreux magic directly to fans around the world.”

Peter Stack, BMG EVP global catalogue recordings, said: “The Montreux Jazz Festival is an institution in music. From Nina Simone and Etta James to Dua Lipa, jazz legends and pop icons alike have honored the Montreux stage with their performances over the past 55 years. This partnership takes viewers and listeners on an intimate journey through time, looking behind the scenes of the legendary festival. Putting together a detailed homage, this is a unique project with the rare opportunity to use audio and audio-visual footage of the highest quality.”

They All Came Down to Montreux (working title) will follow the story from the early days of the festival up until Claude Nobs’ death in 2013. It will include never-released material and rare interviews with artists including Jack White, Carlos Santana, Quincy Jones, George Benson and Questlove, and many of the most iconic performances capturing the festival’s rich history. The Zurich Film Festival 2021 will host the world premiere of the film version of the documentary.

The three-part documentary series is directed by archive specialist Oliver Murray, whose recent releases include the feature-length documentary Ronnie’s. It is co-produced and co-financed by BMG and Beyond TNC in association with Orofena Films. Distribution is through Submarine.

Oliver Murray said: “I could not be more excited and honored to bring Claude’s story to the screen. The festival’s standing in the music industry makes this a unique opportunity, and we’ve been blown away by the positive response from the artist community to the project. We need to remember people like Claude; it’s the visionaries and the mavericks who make the world a better and more interesting place.”

Executive producer for Beyond TNC, Bill Lord, added: “It’s a rare privilege to be able to delve into an archive such as this – one which we believe is completely unprecedented amongst music festivals. It’s equally rare to find someone in the music industry so universally loved as Claude, and the two together are a potent combination for a skilled storyteller like Ollie.”

The documentary is the latest project in BMG’s line of music-related films and television projects including David Crosby: Remember My Name, the Joan Jett documentary, Bad Reputation: The Show’s The Thing, Rudeboy: The Story of Trojan Records and Echo In The Canyon, one of the top-grossing documentaries of 2019.