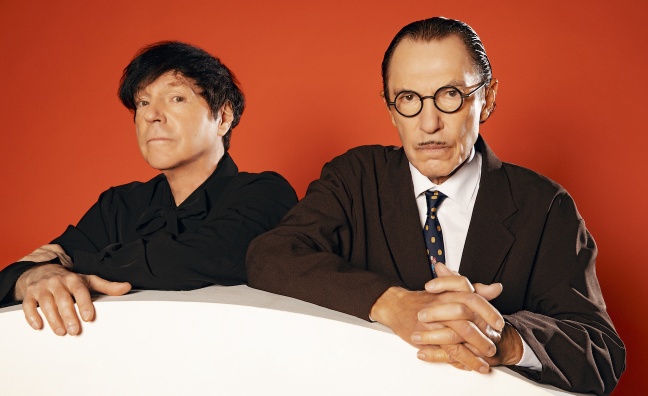 Sparks have returned to Island Records almost 50 years on from their breakthrough album with the label, Music Week can reveal.

The inventive and enduring pop duo have re-signed to Island for the release of their 26th studio album, The Girl Is Crying In Her Latte, released on May 26.

It’s a surprise industry move for the Mael brothers, Ron and Russell, although it follows a growing global awareness of their songwriting prowess and rich legacy. In 2021, there was the release of both Edgar Wright’s documentary The Sparks Brothers and the duo’s own musical film Annette.

Sparks achieved their critical and commercial breakthrough with Kimono My House, their 1974 debut for Island. The album peaked at No.4 and featured the No.2 single This Town Ain’t Big Enough For Both Of Us.

“Sparks have always been one of the most original, groundbreaking and creative groups in pop and their longevity is partly down to their ability to constantly reinvent themselves,” said Island president Louis Bloom. “It’s an honour and thrill having Sparks back on Island. Next year it will be 50 years since Island released Kimono My House. That album sounded like it came from the future and once again with The Girl Is Crying In Her Latte, Ron & Russell have created a pop masterpiece that sounds like no one else.”

It’s an honour and thrill having Sparks back on Island

“Funny how things work!” said Sparks’ Ron and Russell Mael. “One of the most memorable periods for Sparks, the one that forever cemented our relationship with the UK and also exposed Sparks to a bigger audience around the world, was the ’70s Island Records era.  Chris Blackwell, Muff Winwood and co went all in on our album, Kimono My House, and released a truly non-conventional first single, This Town Ain't Big Enough For Both Of Us. Their belief (and ours) proved right: that there was a place for both bold creativity and commerciality in pop music.

“And here we find ourselves in 2023, almost 50 years later, re-signing with Island Records, again with an album that we all feel is as bold and uncompromising as anything we did back then, or for that matter, anytime throughout our career. We're happy that after so much time, we've reconnected with Island, sharing the same spirit of adventure that we all had way back when, but with our new album, The Girl Is Crying In Her Latte.”

“Levels of interest in Sparks, worldwide, have never been so high,” said the duo’s manager Sue Harris. “In part this is due to the releases of the Edgar Wright directed documentary The Sparks Brothers and Annette, the musical film Ron and Russell wrote, but it is also due to their seemingly inexhaustible creativity and sheer hard work. Each album is more ambitious, each tour larger and more far reaching. It was important to partner with a label who could match the band’s ambition on a global scale.”

To coincide with the album release, Sparks will take to the road for a world tour that will include two sold-out headline shows at London’s Royal Albert Hall. In the US, the LA-based duo are about to announce the largest headline show of the band’s career.