"The bare minimums should be done by now": The Black Music Coalition on the legacy of Blackout Tuesday 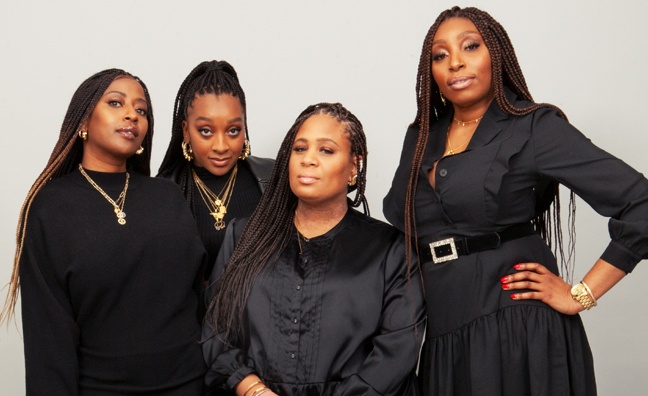 Tomorrow (June 2) will mark the one-year anniversary of Black Out Tuesday. The Show Must Be Paused initiative – which was set up by Atlantic senior director of marketing Jamila Thomas and Brianna Agyemang, former Atlantic exec and now senior artist campaign manager at Platoon – encouraged people working in the music industry to not conduct any business and instead take a day off for reflection and community engagement following the murder of George Floyd.

For the new edition of Music Week, Natty Kasambala interviewed Char Grant, Afryea Henry-Fontaine, Sheryl Nwosu and Komali Scott-Jones, founding members of the Black Music Coalition – which was formed to eradicate racial injustice and establish equality for Black music execs, artists and their communities. In the feature, the BMC reflect on the legacy of the day the music business pressed paused, and the progress that has been made since.

On June 9, 2020, the BMC sent its open letter to chairmen, presidents and CEOs across the industry – which drew up a list of calls to action addressing five areas: unconscious bias training, career development, internal task forces, financial investment and a shift from the term ‘urban’ to ‘Black music’. In its wake, Sony, Warner and Universal each committed funds to anti-racism initiatives on an international scale.

“Overall, we’ve been heartened by the responses of music business organisations,” Nwosu told Music Week. “We’ve been so pleased to see the task forces that have come up at various labels and companies. It is obviously a step in the right direction, but we’re aware that this is a long game. In some meetings we have, we’re frustrated by things not moving ahead quickly, then we have to recognise our own mere mortal strength, but people have been moving forward and that has been good to see."

“I don’t think the industry is inclusive yet, I think we’re right at the start of people even acknowledging that this is the case,” said Scott-Jones. “The next step is not just how many Black people work for you, but at what level? Will they still be there in a few years? What does senior leadership look like and how far up the company does that go? And in which departments? Is it just marketing and A&R? And what is their day-to-day experience like?”

“And are they being paid equally to their white counterparts?” added Henry-Fontaine. “That’s the next one. Hires, career progression and pay equality are essential, but we also have to look at the environment, because it’s all well and good Black people being in positions, but if everyone around them doesn’t feel like this is the necessary change we need to improve our industry, then we’re still going to come up against problems.”

While some progress has been signaled – “to see so many companies and publications now championing [Black culture] by not using the term ‘urban’, and using the term ‘Black music’ or referring to the genre specifically has been a really positive step,” said Henry-Fontaine – the BMC highlighted a host of challenges that lay ahead for Black artists and executives.

“Our Black artists are facing different issues to their white counterparts,” said Scott-Jones. “[Black] genres are highly inflated with young artists, typically from working-class backgrounds, being offered large advances off the back of the success of a track in a short time period. Not all of them have time to be connected with a solid team, from management to legal, meaning they could be accepting less favourable deals.”

“The lack of artist development contributes directly to the lack of executive development,” added Grant. “Think about the culture of bringing young executive talent in to look like the people [labels] want to sign. Things are signed off numbers or social heat, or whatever else that isn’t to do with artistic integrity, the music or the five-year plan. It’s just, ‘It’s a song, it’s working, let’s go.’”

The BMC collaborated with PRS Foundation for its Power Up initiative, which was formed to address anti-Black racism in the industry alongside YouTube Music and Beggars Group. The scheme will support 40 Black music creators and professionals (20 of each) and assist them with access to grants of up to £15,000, plus mentoring infrastructure, partner support and marketing assistance.

“Everyone talks about the financial side of it,” said Nwosu, “but actually the bit that makes me most excited is the support and the connectivity to others in the industry who can support people’s goals. Because this is what we’ve been talking about, right? Not just being brought into the industry on a one-dimensional tip – for this artist, or because you’re Black, or you know about certain beats or whatever. The reason why I relish [the Power Up programme] is because it’s action – because we’re done with lip service. We want to see what you actually put into action, aside from the bare minimum. If you go back to that open letter, those calls to action are bare minimums, that should have been done by now.”