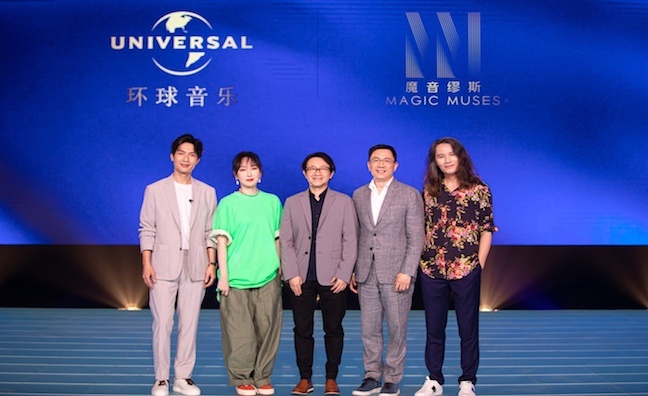 The label – which will be based in Beijing – will be run by veteran film marketing executive Kelvin Hou, who has been appointed as CEO, effective immediately. Hou was previously the founder and former CEO of China’s online movie database and community Mtime.

Speaking about the launch, Kelvin Hou, said: “Magic Muses will be devoted to creating  an open and sustainable platform to bring together local talent from music and the film and TV industries, help them to share ideas, exchange resources and produce quality works to engage new and wider audiences globally.”

The first domestic label to be launched by Universal Music China in more than a decade, Magic Muses will work with local artists and composer talent to create bespoke musical works for high-profile film and TV projects in China.

The press release stated: “In recent years, China’s film and TV industry has expanded rapidly, it boasts the largest number of cinema screens per country in the world, and has ranked as the world’s second-largest movie market in terms of box office since 2012, behind only the US.”

Sunny Chang, chairman and CEO of Universal Music Greater China, said: “The launch of Magic Muses shows UMG’s strategic commitment to helping further raise the awareness of Chinese music culture and creativity globally. In the future, the label will play an important role in helping Chinese movie and TV music reach new audiences around the world, thanks to UMG’s unparalleled global network of labels and support. We look forward to working alongside the Chinese film industry collaboratively to create projects that will help firmly establish the genre in China.”

Garand Wu, managing director of UM China, added: “Magic Muses is the first music label to be launched by Universal China in the past ten years, and the first label dedicated to Film and TV soundtrack and score in China to be set up by a major international music company. As the fastest growing movie market in the world, there is a great opportunity for our industries to collaborate across this previously neglected genre, in order to reimagine the commercial and promotional opportunities that music can add to film projects. It is our vision to help redefine film/TV music production and to make Magic Muses the most respected and recognizable home for Film & TV music in China.”

The company also unveiled its first collaborative film project, which will see Magic Muses produce and release the original film soundtrack, as well as provide musical promotion and marketing for the forthcoming film, My People My Homeland.

In addition, Universal Music China also announced the launch of Hi! Movie Music, which it says is “China’s first original online series dedicated to the promotion of Chinese movie and TV music.”