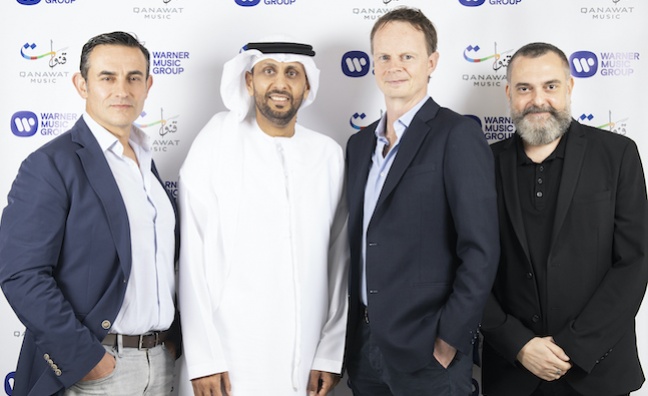 Warner Music Group has entered into an agreement to acquire Qanawat Music, a leading music distributor in the Middle East and North Africa.

The deal, which is expected to complete soon, will see Warner Music significantly expand its presence across the region. Qanawat Music will become the major’s key local distributor and a source of upstreaming opportunities.

Qanawat Music was a division of Qanawat FZ, a leading regional digital mobile solutions provider. The company was founded by Adnan Al-Obthani, who will remain CEO of Qanawat Music following the acquisition, while also continuing to work for Qanawat FZ. Qanawat Music will operate as a standalone company under the Warner Music Group umbrella.

Qanawat Music has a presence in Dubai, Cairo and Casablanca, and offers its services in more than 20 countries across the region. It is responsible for a significant proportion of new releases in the Middle East and North Africa, and also has interests in brand partnerships and music publishing administration.

Adnan Al-Obthani said: “Warner Music has a long-term vision for developing the market here in the Middle East and North Africa, as well as a commitment to connect Arabic artists with a global fanbase. We’ve built this business up over 20 years and were determined that we would only partner with a company that we could confidently trust to look after our artists’ best interests.  This will be a new chapter for Qanawat Music and we couldn’t be more excited.”

Alfonso Perez-Soto, president, emerging markets, Recorded Music, WMG, said: “With this new deal, we have a massive opportunity to export exciting talent from the Middle East and North Africa – there is an important and growing Arabic diaspora worldwide that we can tap into and which will help amplify the music.

“We’ve recently seen huge global success with our artists from Sub-Saharan Africa and we’re eager to repeat this achievement by building a proper distribution and upstreaming structure for the best talent from the Arabic world. This acquisition will also see Warner Music expand its footprint in the region, gaining representation in Dubai, Cairo and Casablanca for the first time.”

With this new deal, we have a massive opportunity to export exciting talent from the Middle East and North Africa

Moe Hamzeh, MD, Warner Music Middle East, added: “This is a seismic moment in the development of the music industry in our region. Combining the experience and relationships Qanawat has built up over the years with the global reach and expertise of Warner Music will hugely benefit many artists. This deal will shine a spotlight on the music industry in the Middle East and North Africa.  It is also the latest example of Warner Music Group’s long-term commitment to the region, with many more developments in the pipeline.”

The recorded music market in the Middle East and North Africa is one of the fastest growing in the world.  Increasing numbers of music fans across the region – which has a population of some 430 million – are able to access streaming services.

“There is a wide range of local music scenes, drawing on the region’s rich cultural heritage, and a shared language means there is strong potential for artists to break across borders,” added the statement. “An additional audience for those artists, which can help spread their influence and music, is the sizable Arab diaspora around the world, estimated in the tens of millions.”