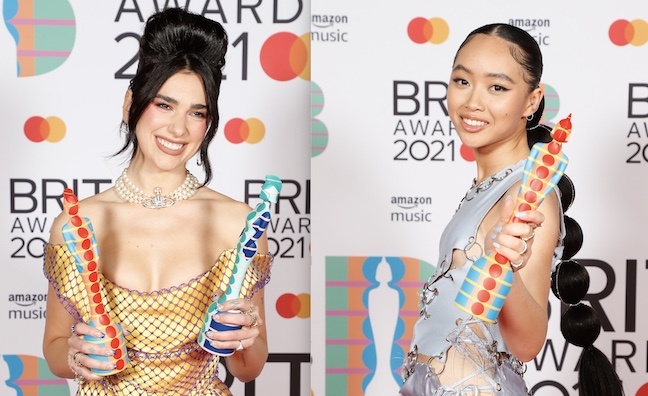 Warner Records came out on top at the BRITs with three awards on the night.

As well as two trophies for Dua Lipa (Female Solo Artist and Mastercard Album for Future Nostalgia), Griff was awarded the Rising Star Award. Both artists also got to perform in front of an audience at The O2 as live music returned to the venue.

Griff’s confident rendition of Black Hole was well received (including a nod from Taylor Swift in her awards speech), while Dua Lipa’s spectacular medley incorporating pre-recorded footage on the London Underground was one of the highlights.

“It’s been an incredible year for Dua and winning the British Female Solo Artist and British Album awards, really is the icing on the cake,” Phil Christie, president, Warner Records, told Music Week.

“Watching her perform in front of the NHS frontline workers was a really special moment for everyone involved and I’d like to say a massive congratulations to Dua and a thank you to the Warner Records team for their exceptional work on this campaign. It was also an amazing night for Griff, and I’m sure this won’t be the last we’re seeing of her on the BRITs stage, she has an unbelievable career ahead of her.”

Future Nostalgia remains in the Top 10 after more than a year and now has sales of 363,995 copies. The album can now expect a BRITs boost following the ceremony.

“Future Nostalgia was widely hailed as an instant classic the moment it dropped and was proof of Dua’s extraordinary growth as a recording artist and writer, so watching her recognised with the British Album and British Female awards last night was a fantastic feeling,” Joe Kentish told Music Week. “Her staggering performance was proof again of the continuing evolution of one of the world’s biggest stars.”

Kentish also predicted big things for Griff, who releases her One Foot In Front Of The Other EP next month.

“Griff’s performance of Black Hole was an incredible moment in its own right, but I think given how early this comes in her career it was jaw-dropping,” he said. “Watching these two young women light up the stage last night is a memory we’ll treasure as a label for a long time.”

For all the winners at the 2021 BRITs, click here. Read our full review of the show here.