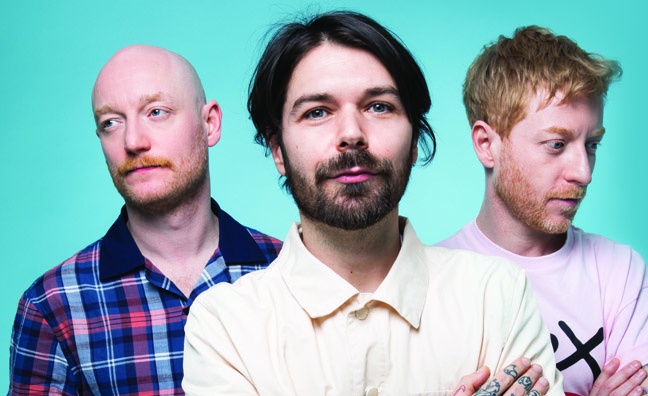 Last month, we welcomed Biffy Clyro to our cover for the very first time ahead of the release of their excellent new album, A Celebration Of Endings.

Due to arrive on August 14 via Warner Records, A Celebration Of Endings is the sound of a band who – despite now reaching their eighth record – are more determined than ever before to keep building and evolving as a band.

Here, in an unread extract of our recent cover feature interview, Warner Records president Phil Christie takes us further inside the Biffy campaign…

What was your reaction to Biffy Clyro’s album?
“I’ve been working with the band in an A&R capacity across the process, so it’s come together over a number of months. But to take a step back from it and come back with fresh ears as a body of work, I’m delighted with the record. It’s spectacular. The thing with Biffy that’s powerful and refreshing is that this is a band who are continually striving to move their sound forward and not rest on their laurels. There’s huge energy in their process.”

The album was pushed back from its original release date due to the coronavirus pandemic – what tangible impact did that have on the campaign?
“We haven’t been able to build ticket bundles in the way we would have done, if they had their live dates announced. We normally would have insulated our Week 1 with a certain amount of ticket bundling. We haven’t been able to do that. In a way it’s meant that the campaign has become more in line with a pop campaign, running multiple singles pre-release and we’re not bundling up as many records. But they’ve made videos from home, their Big Weekend performance from home. There's been a shit-tonne of amazing creative, engaging content we’ve been able to put together. And that’s credit to the band.”

In the modern era, rock bands don't always last long on a major label. Why does the Biffy Clyro and Warner partnership work so well?
“There’s a huge degree of mutual loyalty and respect between the individuals as the label and the individuals in the band and the manager. A degree of understanding. We allow them to be the band they want to be. That respect is absolutely reflected back, we have a great working relationship and long may that continue. We push them, they push us.”

Finally, where do you think Biffy fit as a band into the wider constellation of rock music right now?
“I think they’re one of the most important British rock bands of modern times. They’ve got such range. They have a real alternative core but then, obviously, they have this huge scope and scale and that’s what’s made them so successful. The fact that a lot of their core early fans are still their core fans now is testament to the fact that they’ve remained very true to their origins. That bond is strong as ever and that’s the basis with which we do all our campaigns. It’s one of the most important factors we consider. The album is serving a core audience, but there’s always a scope, scale and ambition of moving forward and hitting new audiences and scaling great commercial and international heights. They strike that balance really, really well. Simon Neil writes unbelievable melodies and his lyrics are incredible. The thing with Biffy that’s always fun and exciting is the range and scope on these records, particularly this one. You’ve got heartfelt ballads, skyscraper singles, punkier tracks, super-alternative things. The album finishes with Cop Syrup… and the core fans will love Cop Syrup! There’s something for them and something for people who’ve never heard of Biffy Clyro. And if that makes it sound like the album might like focus, it’s the contrary to that. The album feels incredibly cohesive to me. There’s no band like them. So few bands can have that range and be cohesive. You can have Tiny Indoors Fireworks and Cop Syrups and Space and Instant History all on one record and it feels like one band. It’s amazing.”